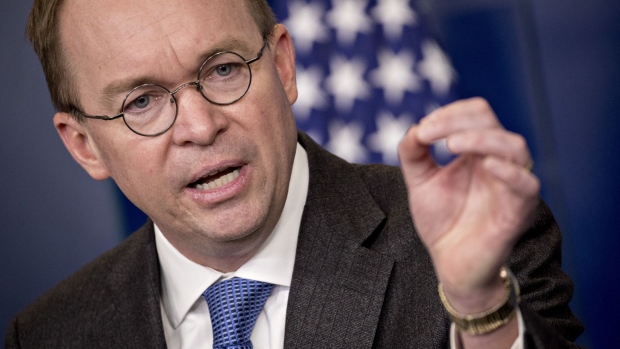 Mick Mulvaney, former White House chief of staff to President Donald Trump, said Thursday he is resigning from his current post as special envoy to Northern Ireland, joining a growing list of officials departing less than two weeks before the end of Trump’s term.

“I quit because it is the only thing I could do -- officially -- to express my disapproval of what happened yesterday,” Mulvaney told Bloomberg News.

Several White House officials are weighing departures after witnessing the president’s role in and response to a violent mob of his supporters storming the Capitol and disrupting the counting of Electoral College votes.

“Those who choose to stay, and I have talked with some of them, are choosing to stay because they’re worried the president might put someone worse in,” Mulvaney said.

Chad Wolf, acting secretary of homeland security, said in a statement Thursday that he plans to stay in his post to ensure a smooth transition to President-elect Joe Biden’s administration, but expressed outrage over Wednesday’s violence.

“We now see some supporters of the president using violence as a means to achieve political ends. This is unacceptable,” Wolf said. “I implore the President and all elected officials to strongly condemn the violence that took place yesterday.”

Matt Pottinger, Trump’s deputy national security adviser, resigned over the episode, as did Ryan Tully, the senior director for European and Russian affairs on the National Security Council. Tyler Goodspeed, acting head of the Council of Economic Advisers, has also stepped down, a person familiar with the matter said.

Mulvaney earlier told CNBC that he called Secretary of State Michael Pompeo to tender his resignation.

In November, Mulvaney had a rosier view of the end of Trump’s tenure. In an op-ed published in the Wall Street Journal, Mulvaney predicted Trump would leave office gracefully.

“The president will fight like a gladiator until the election is conclusively determined,” he wrote before the race was called.

But, he continued, once a winner is determined, “I have every expectation that Mr. Trump will be, act and speak like a great president should -- win or lose.”

Rioters mobbed the Capitol Wednesday after Trump encouraged supporters to object to what historically have been ceremonial proceedings. Lawmakers were forced to evacuate and four people died in the mayhem.

Trump later told supporters in a tweeted video “you have to go home now” but he didn’t condemn the violence and said “we love you.”