Larry Berman: China-U.S. deal likely in the next month or so

President Donald Trump is right to say that his tariffs are generating billions of dollars for the U.S. But China and other countries aren’t paying them as he’s suggested.

According to data from U.S. Customs and Border Protection, more than US$13 billion in duties imposed by the Trump administration were assessed on imported goods as of Dec. 18. Actual collections could lag and be lower because of refunds and other factors, but Treasury Department reports show receipts from all customs duties have risen sharply since the tariffs took effect.

While Trump has suggested on Twitter and in public comments that tariffs are somehow being charged to or paid by China and other countries, trade economists say that’s generally misleading. U.S. importers of record are responsible for the duties, and ultimately U.S. businesses and consumers could pay through higher costs, they say.

Trump is “suggesting this is bringing in lots of new revenue and all of the burden is falling on the Chinese,’’ said Phil Levy, senior fellow on the global economy at the Chicago Council on Global Affairs and a former senior economist for trade for President George W. Bush’s Council of Economic Advisers. “I think that’s mostly false.’’ 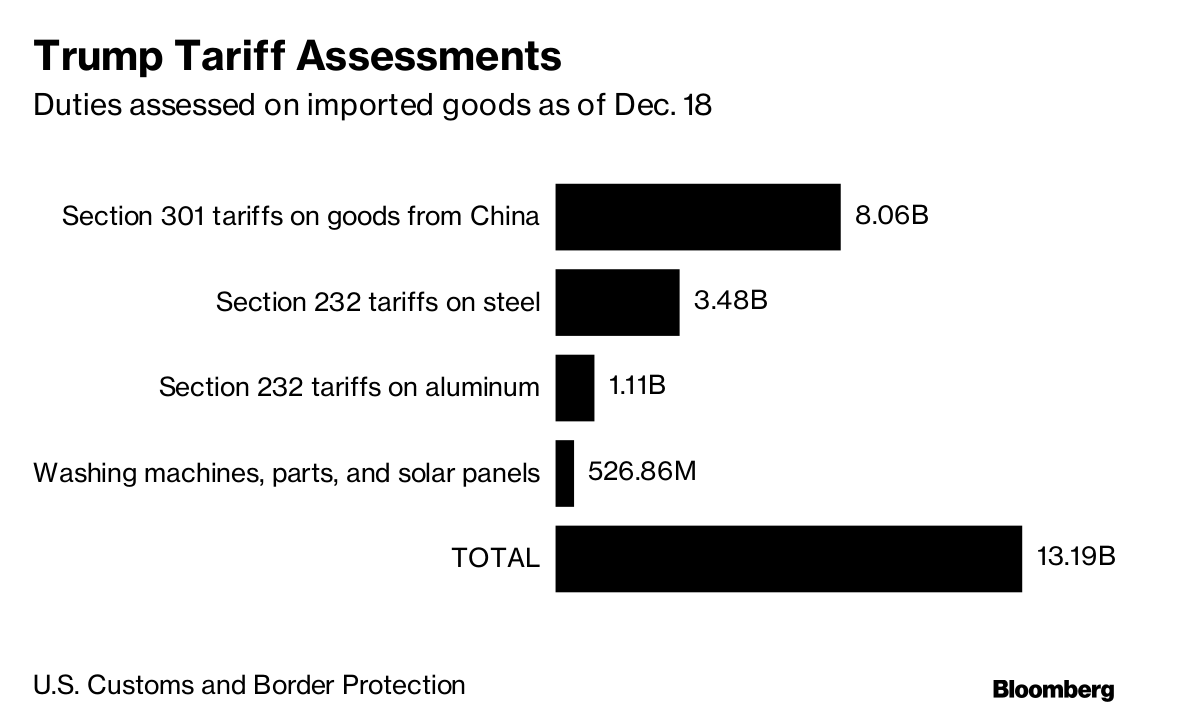 “Tariffs on Chinese imports are paid by Americans, not by the Chinese or their government. The President’s tariffs are simply a #tax on American consumers,’’ Hanke said on Twitter Jan. 6.

Hanke also pointed out that there are offsets to increased revenue from Trump’s tariffs, including as much as $12 billion in aid being paid to farmers after China slapped retaliatory tariffs on U.S. agricultural products.

The White House didn’t respond to messages seeking comment. Trump has said any economic pain from tariffs or retaliatory duties imposed by other countries will be outweighed by the long-term benefits from new trade deals.

The Trump administration imposed tariffs starting last January on foreign-made solar equipment and washing machines, then levied duties on steel and aluminum imports from March on the grounds of national security. He has slapped duties on about US$250 billion in Chinese goods in response to a trade deficit and allegations of intellectual property theft and other unfair trade practices.

Customs and Border Protection collects the tariffs based on the price paid for shipments and the tariff rate in effect, and duties are charged when shipments are released into the U.S. The assessed amount now tops US$13 billion, with $8 billion coming from the duties on Chinese goods, data provided by CBP show.

The duties are deposited in the U.S. Treasury. Customs duties increased by $8 billion in the final three months of 2018, an 83 per cent gain from the year-ago period thanks in large part to tariffs imposed by Trump, according to estimates from the non-partisan Congressional Budget Office.

Trump’s comments have suggested the U.S. is benefiting without paying, such as a Jan. 3 tweet that “the United States Treasury has taken in MANY billions of dollars from the Tariffs we are charging China and other countries that have not treated us fairly.” A day later he told reporters that “we’ve taken in billions and billions of dollars in tariffs from China and from others.’’

Companies aren’t equivocating about the cost. Ford Motor Co. executives, speaking during the Deutsche Bank Global Automotive Conference in Detroit on Wednesday, said they see a $700 million headwind from duties this year. General Motors Co. said late last year that tariffs on steel and aluminum had already cost it $1 billion.

“Let me be very clear: Tariffs are taxes paid by American families and American businesses -- not by foreigners,’’ Thomas Donohue, president of the U.S. Chamber of Commerce, said in his annual state of American business address last week..