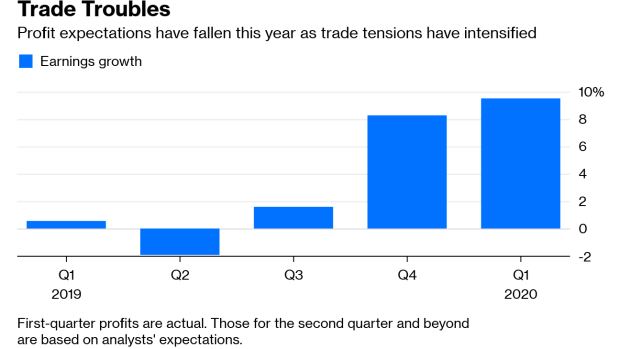 (Bloomberg Opinion) -- The animal spirits have gone back to sleep, if ever they got up in the first place.

After plummeting on Monday amid trade-war tensions, stocks did rally on Tuesday and extended their gains on Wednesday on a report that President Donald Trump will delay tariffs on auto imports. Trump is always quick to point to the stock market as a barometer of his administration’s success — the S&P 500 Index remains up more than 13.5% for the year, after all — but price is not the best gauge of whether investors believe his policy mix of tax cuts and tariffs will lift the economy. The better measure of that is what investors are willing to pay for corporate America’s future profits. Based on that, investors and business managers are clearly less optimistic about Trump’s policies than they were the day he was elected.

The S&P 500 is now 1.2% cheaper, based on expected earnings, than it was before Trump was elected president, and that is even after Tuesday’s rally. The S&P 500 trades at 16.6 times the next four quarters of expected earnings, down from 16.8 in early November 2016. It’s even worse from the day Trump took office. Since then, market valuations are off about 4%.

That’s not a huge drop, and an argument could be made that the market was already richly valued when Trump took office, so improving on that would be tough. Stocks traded at a price-to-earnings ratio of just 11 when President Obama took office, for instance. But the fact that stock valuations are about where they were when Trump was elected is notable because of all the talk of a revival of animal spirits soon after he was elected. It is even more surprising, given that Trump’s tax cuts are on track to boost the profits of the S&P 500 alone by roughly $2 trillion during the next decade. The lack of enthusiasm among investors and executives suggests a countervailing force is at work.

In late 2016 and early 2017, stocks rose despite no discernible improvement in the economy. Many people, most notably JPMorgan Chase & Co.’s CEO Jamie Dimon, attributed that rise to those so-called animal spirits, the notion that investors were suddenly more optimistic about corporate America’s prospects and the economy. Commentators attributed that optimism to Trump and his proposed policies. The price-to-earnings multiple of the S&P 500 rose to 18.6 in November 2017. That optimism was supposed to stretch to corporate executives, too, who were said to be ready to take more risks, hire more workers and invest more in America.

That hasn’t appeared to pan out. Hiring is up, but that seems to be driven by the continued slow economic expansion, not some burst of activity. Business spending did spike after the tax cuts of late 2017, but more recent numbers suggest that companies have not maintained higher levels of capital expenditures. Even right after the tax cut, though, there were strong signals that corporations would spend more on stock buybacks than on direct investments in their businesses. It now appears the uncertainty created by Trump’s trade policies are outweighing the optimism engendered by the tax cuts.

Investors seem to be taking all this in. Analysts expect corporate profit growth to slow from here, not accelerate, as promised when the tax cuts were passed. A full-blown trade war will cause profit expectations to tumble further. The answer to whether investors have spirit right now is “Not much.” This is important not just for how the stock market will trade through the current trade-war anxiety but afterward as well. Trump will most likely find stirring investors’ spirit animals a much harder task the second time around.

To contact the author of this story: Stephen Gandel at sgandel2@bloomberg.net

Stephen Gandel is a Bloomberg Opinion columnist covering banking and equity markets. He was previously a deputy digital editor for Fortune and an economics blogger at Time. He has also covered finance and the housing market.