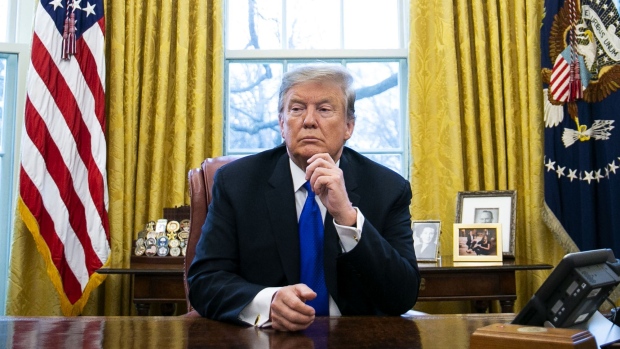 President Donald Trump said Friday that the biggest risk to his re-election efforts is mail-in voting which he claims is rife with fraud that could cost him a win in November.

In an interview with Politico, Trump asserted that expanded absentee voting would hurt his candidacy. Democrats are pushing for more mail-in voting in response to the coronavirus, and in April, the president’s re-election campaign and the Republican National Committee launched a multimillion dollar legal effort aimed at stopping them from altering voting laws across several states.

“My biggest risk is that we don’t win lawsuits,” Trump told Politico. “We have many lawsuits going all over. And if we don’t win those lawsuits, I think -- I think it puts the election at risk.”

The coronavirus pandemic has upended the 2020 election, raising concerns about how voting will take place, with several states resorting to absentee ballots to avoid lines and in-person voting.

Trump has escalated attacks against mail-in voting, tweeting that it would cause the “greatest Rigged Election in history” and arguing, without evidence, that it would allow people to commit fraud by retrieving mailed ballots, duplicating them or even forging signatures.

His criticism has raised questions about whether he would leave the office willingly if he loses the election. Politico asked Trump whether increased mail-in voting would cause him to question the legitimacy of the election and whether he would accept the results no matter what.

“Well, you can never answer the second question, right? Because Hillary kept talking about she’s going to accept, and they never accepted it. You know. She lost too. She lost good.”

Clinton conceded the day after the election.

Even as several states have seen coronavirus cases spike, Trump insisted that he believes the virus in on the decline. The president is scheduled to hold a rally in Tulsa, Oklahoma, on Saturday, the first big re-election event to take place after the pandemic hit. Tulsa officials have suggested Trump cancel the rally, citing a rising number of infections.

During the interview, Trump warned other GOP Senate candidates that if they don’t support him, they will lose. Republicans are fighting to keep their Senate majority, a conversation that Trump had with Senate Majority Leader Mitch McConnell at the White House earlier this month.

“We will, on occasion, have some senators that want to be cute,” Trump said. “And they don’t want to embrace their president.”

“If they don’t embrace, they’re going to lose, because, you know, I have a very hard base. I have the strongest base people have ever seen,” Trump said, while naming former Republican senators who distanced themselves from him and then lost their seats.