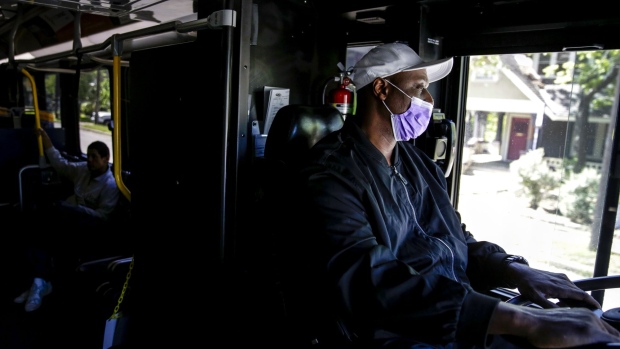 The sharp resurgence of COVID-19 in Sunbelt states is prompting a new spate of face-mask mandates as governments try to curb the pandemic without reverting to lockdowns that wrought havoc on their economies.

In some cases, the orders have reinforced the politicization of public-health measures, with President Donald Trump mostly refusing to wear face masks in public and declaring in May that he “didn’t want to give the press the pleasure” of seeing him in one.

But with infections hitting record levels, Democratic mayors in some Republican-run states are going out on their own to demand the face coverings -- and some governors are going along. Arizona’s Republican Governor Doug Ducey changed course and gave local governments the power to require masks. Texas’s Greg Abbott said mayors couldn’t require citizens to mask up, but allowed them to sanction businesses that permitted patrons to enter unprotected.

Among mayors taking steps to require masks are Steve Adler of Austin, Texas; Jane Castor of Tampa, Florida; and Steven Reed of Montgomery, Alabama. All of them are Democrats in Republican states.

“I am taking this action for the health of our community, for the physical health, but also for the economic health,” Tampa’s Castor said in her daily update Thursday, speaking about her order to wear face masks indoors when social distancing isn’t possible. “We are just getting back up on our feet economically, and the last thing that we can do is to go in reverse and to have to have businesses close down.”

In Arizona, infections rose by 2,519 cases Thursday -- the biggest daily increase -- to a cumulative 43,445. Municipal leaders there are rushing to pass their own mask policies. Council members in Phoenix will hold a special meeting Friday to consider a face-covering rule. Ducey “gave the power back to cities,” Mayor Kate Gallego tweeted.

Other city councils in the Phoenix metro area, such as Mesa, Gilbert and Glendale, will also meet on the matter Friday. Mayors in cities including Tucson and Tempe already issued mask requirements or have started adding them to emergency orders.

In the Deep South, the pandemic has been a scourge, particularly in the Black Belt, where many residents are poor and lack access to health care. Reed’s executive order came after a measure to require masks failed in the Montgomery City Council on Tuesday. It split largely along racial lines, with Black members supporting the proposal.

”After listening to our health experts and warnings they continue to give us, we’re doing this today because it’s the right thing to do,” Reed said Wednesday, flanked by two white-coated doctors who had appeared before the council to argue the cause.

The new orders weren’t limited to red states: California had its biggest daily increase in coronavirus cases Thursday, and Democratic Governor Gavin Newsom issued new guidelines requiring masks in most situations outside the home in the nation’s most populous state.

The Trump administration’s failure to devise a unified strategy for fighting the pandemic has left decisions largely to the states, and many of Trump’s gubernatorial supporters have followed his lead in spurning masks. Indeed, Nebraska Governor Pete Ricketts has told local governments they will miss out on federal Covid-19 funding if they make people wear masks in courthouses and government offices, the Omaha World-Herald reported.

Trump told the Wall Street Journal in an interview published Thursday that some people may be wearing masks to signal disapproval of him, and that masks may actually contribute to the disease’s spread when people fidget with them.

The new mask measures come as COVID-19 is making a resurgence, including in places that had fared relatively well earlier in the pandemic. But state leaders across the political spectrum have proved reluctant to roll back reopenings, with many local businesses having barely survived the first wave of stay-at-home orders.

“Mayors are trying to find the things that they can do when the state governor is not taking stronger action,” said Lindsay Wiley, director of the health law and policy program at the American University Washington College of Law, speaking from Bethesda, Maryland. “You’ve got governors who have made a very clear choice to follow the president’s lead in insisting that we can only move forward more and more, and not go back in that reopening process.”

In Florida, Governor Ron DeSantis has dismissed the possibility of a new lockdown, even after a COVID-19 surge there prompted New York Governor Andrew Cuomo to threaten mandated quarantines for Floridians heading north. DeSantis has said there is relatively ample hospital capacity in his state.

In a presentation Tuesday in Tallahassee, DeSantis noted that the average age among COVID-19 positives was 37 last week, down by nearly half from March, implying that the clinical consequences of the latest outbreaks may be muted. Florida reported 85,926 COVID-19 cases on Thursday, up by 3,207, the most ever in a day.

On Thursday, Texas reported a record 3,516 new COVID-19 cases, the biggest one-day rise, and hospitalizations surged by 12 per cent to 940 in Houston. Lina Hidalgo, the top official in surrounding Harris County, is considering a mask rule there, the Houston Chronicle reported.

Meanwhile, the operator of the Tulsa, Oklahoma, arena that will be the scene of a Trump campaign rally Saturday said it had asked his re-election campaign for a written plan to safeguard the event against the state’s growing outbreak. The Trump campaign has said it will issue a face mask to all who attend, but it won’t require supporters to actually use them.