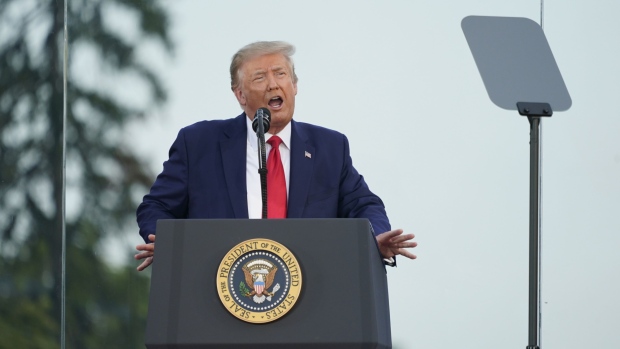 U.S. President Donald Trump speaks during the Salute to America event on the South Lawn of the White House in Washington, D.C., U.S., on Saturday, July 4, 2020. Bloomberg/Chris Kleponis/Polaris

The White House has started touting hydroxychloroquine as a potential treatment for COVID-19, despite the Food and Drug Administration issuing a warning and revoking its emergency use authorization.

U.S. President Donald Trump issued a series of tweets Monday touting use of the drug and side-stepping his own agency’s warnings about it. White House adviser Peter Navarro continued the push Tuesday morning during an interview with CNN and later while speaking to reporters at the White House.

“I can help save some lives here today by raising awareness about this medicine,” Navarro told CNN on Tuesday. “Give peace a chance and give hydroxy a chance, it can save lives.”

An FDA warning issued July 1 cautioned against use outside of a trial or hospital “due to risk of heart rhythm problems.” The agency revoked its emergency use authorization, or EUA, two weeks earlier “based on recent results from a large, randomized clinical trial in hospitalized patients that found these medicines showed no benefit for decreasing the likelihood of death or speeding recovery.” The EUA had been issued in March.

Trump had regularly touted the drug early in the pandemic, taking a round of it himself, and even stockpiling pills and sending some abroad, before warnings signs started mounting. His tweets Monday, as he faces sinking poll numbers and soaring case totals from the virus, indicate a renewed interest. One tweet late Monday appeared to urge the FDA to reverse its position.

Navarro was later asked by reporters at the White House if the president would take another round of the drug himself. “You’ll have to ask the president,” he said.