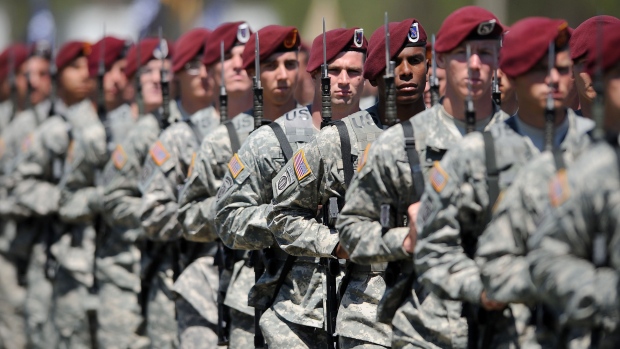 (Bloomberg) -- President Donald Trump has threatened to veto the entire defense bill if it contains a provision that would strip the names of Confederate generals from U.S. military bases.

Trump, in a tweet just before midnight on Tuesday, said he would veto the legislation if an amendment sponsored by Senator Elizabeth Warren of Massachusetts “will lead to the renaming (plus other bad things!) of Fort Bragg, Fort Robert E. Lee, and many other Military Bases from which we won Two World Wars.”

The Warren amendment, which would establish a commission that would put in place a plan for the removal of the names within three years, was included in the defense bill by the Republican-led Senate Armed Services Committee -- in defiance of Trump.

Several American military installations honor generals who led armies against the U.S. Among the demands for racial justice that have emerged since the death in police custody of George Floyd, an African-American Minneapolis man, were that the names of those bases be changed. Proponents say the military shouldn’t continue revering men who led an insurrection in order to preserve and perpetuate slavery.

Hours before Trump tweeted his threat, Tate Reeves, the governor of Mississippi signed a law that would remove the Confederate battle emblem from the state’s flag. Mississippi was the last state with the symbol on its flag.

The flag was pulled down from a display at the U.S. Capitol and replaced with one that had the state’s seal on it.