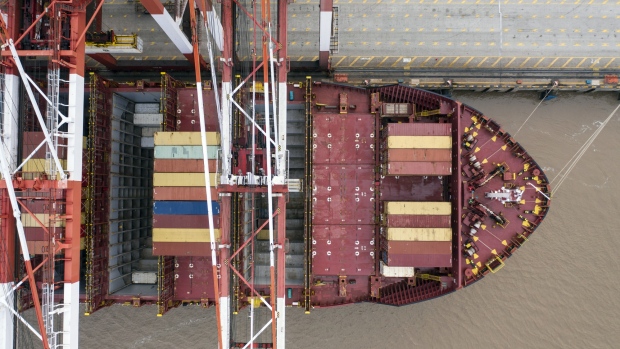 A container ship is docked next to gantry cranes at the Yangshan Deepwater Port, operated by Shanghai International Port Group Co. (SIPG), in this aerial photograph taken in Shanghai, China, on Friday, May 10, 2019. The U.S. hiked tariffs on more than $200 billion in goods from China on Friday in the most dramatic step yet of President Donald Trump's push to extract trade concessions, deepening a conflict that has roiled financial markets and cast a shadow over the global economy. , Bloomberg

Global trade is starting to exhibit war wounds that not even a U.S.-China ceasefire can heal.

Bloomberg’s Trade Tracker is as bleak as it’s been since its start in November, thanks in part to sour purchasing managers’ indexes from the battered industrial engines of Asia to sluggish Europe, and then on to the barely expanding U.S. factories. It was a blue Monday that threatens to carry through this week and beyond. Here are some other warning signs:

An S.O.S. to the World: The shipping category of Bloomberg’s Trade Tracker shows the effects of a trade war that’s weighing on exports.

To contact the author of this story: Michelle Jamrisko in Singapore at mjamrisko@bloomberg.net