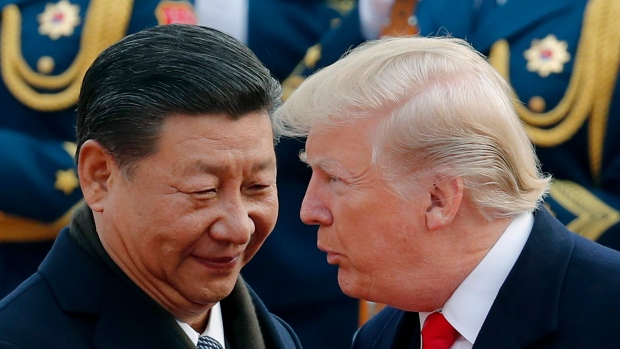 In this Nov. 9, 2017, file photo, U.S. President Donald Trump, right, chats with Chinese President Xi Jinping during a welcome ceremony at the Great Hall of the People in Beijing. , (AP Photo/Andy Wong, File)

U.S. President Donald Trump’s revelation last month that he hadn’t spoken with his Chinese counterpart in “a long time” and isn’t interested in doing so is just the tip of a much broader breakdown in communications that’s stoking concerns among former officials from both sides.

When the Trump administration took office in 2017, there were about 100 officially organized exchange forums -- touching on everything from pharmaceuticals to technology policy -- between the two countries, according to Arthur Kroeber, a China analyst for almost three decades. Gao Zhikai, a former Chinese diplomat who served as translator to Deng Xiaoping, cites the same tally.

Almost all of these dialogues have now died, meaning that senior and mid-level officials on both sides are increasingly operating in the dark about their opposite numbers’ activities and intentions. That raises the risk of misunderstandings festering or escalating into crises, and inhibits cooperation that otherwise could contain emerging disasters, such as COVID-19.

The “collapse of these structures is not the trigger of a bad relationship, but the result of a relationship worsening,” said John Pomfret, author of “The Beautiful Country and the Middle Kingdom,” a history of Sino-American ties over more than two centuries.

Despite reaching a “phase one” trade agreement early this year, U.S.-China ties are at their worst in decades. With a focus squarely on the looming election, Trump blamed Xi’s government for not controlling the COVID-19 outbreak before it became a pandemic, killing more than 185,000 Americans. U.S. politicians have expressed outrage over Beijing’s tightening grip over Hong Kong and its treatment of Muslim minorities, targeting officials for sanctions in both situations.

The bilateral discussions canceled or abandoned since Trump took office might not have been able to solve entrenched issues, like the expanding face-off between the two sides in the disputed South China Sea -- the most likely site of any military conflict. But people involved in them in the past say they can help promote back-channel diplomacy and a more nuanced view of the negotiating teams on the other side.

“You need some tracks that are basically talking shops,” said Kroeber, managing director of GaveKal Dragonomics, an independent global economic research firm. Having those forums fosters “relationships that can come into play at times of stress and crisis,” he added.

One key framework for U.S.-China dialog was the 16 or so working groups under the Joint Commission on Commerce and Trade, or JCCT, which was established during the Reagan administration in 1983 as a forum for high-level talks. It linked a wide variety of U.S. and Chinese agencies, from those dealing with commerce to energy, the environment and agriculture.

The Trump administration terminated the JCCT in 2017, along with the Strategic and Economic Dialogue program that was led by the Treasury and State departments. They were replaced with the more narrowly, results-driven Comprehensive Economic Dialogue.

“People felt there was a lot of wasted time and there was a lot of process over substance,” in the previous system, said James Green, who worked at the State Department and U.S. Trade Representative’s office in the Obama administration. For a swath of U.S. agencies, however, “oftentimes the only way to get to their Chinese counterparts was through some kind of dialog structure,” bringing value to the set-up, he said.

They could be useful in practical ways, too.

“U.S.-China collaboration was an important part of the anti-SARS campaign in 2003,” Jennifer Bouey, a senior researcher at RAND Corp., wrote in a July 2019 study. SARS was a pandemic not unlike a smaller scale of COVID-19, which has been a source of friction rather than collaboration between the two countries.

Data and technology sharing, along with U.S. assistance in building China’s public health system and biomedical research, “have benefited both countries and the world,” Bouey wrote. Given China’s rank as the top manufacturer of health products, pharmaceutical ingredients and vaccines, joint work between the two nation’s regulators could help ensure best practices are followed, she noted.

Among potential missed opportunities: applying a template of past work on monitoring influenza control to strengthened real-time analysis of synthetic opioid drug use, the RAND analysis showed.

As the travel industry looks to new standards and procedures in the post-coronavirus era, the U.S.-China Travel & Tourism Working Group won’t be around to coordinate approaches between the world’s two largest economies.

More broadly, soft diplomacy is no longer being developed between the two sides as civilian interactions decline. The U.S. announced in January that it would stop sending Peace Corps volunteers to China after nearly 30 years. And both governments have moved to curtail Chinese student flows to American institutions.

Officials at China’s embassy in Washington said in a statement that the country stands ready to “restore and restart the dialogue mechanisms at all levels and in all areas. All issues can be put on the table. And all differences can be addressed properly through dialogue.”

A spokesperson for the State Department referred to a July 23 speech Secretary of State Michael Pompeo gave at the Richard Nixon presidential library in California, in which he said Xi seeks to tyrannize the world and vowed that the U.S. won’t “bend the knee” to Beijing.

While China has benefited from partnering with U.S. agencies in the past, there’s been resistance among those who see their country’s rise as coming at the expense of the U.S. There is a view among some in Xi’s government that the U.S. “is on an ineluctable slide toward mediocrity,” Pomfret said. And taken as a whole, the dialogs “were never really good at keeping the relationship on an even keel.”

Even so, worrying to observers on both sides is how the breakdown plays out against a backdrop of deepening national security tensions.

History shows the potential for mishaps that test the bilateral relationship. In the military sphere, one came in the early months of the George W. Bush administration. A Chinese warplane collided with an American EP-3 reconnaissance aircraft, forcing it to land on a Chinese airbase on Hainan Island. The 2001 incident prompted stronger military-to-military dialogs and exchanges in order to contain the impact of such occurrences in future.

While interaction between the two militaries is usually professional, the risk of confrontation and misunderstanding remains. In 2018, a Chinese warship came within 45 yards of the USS Decatur as it sailed near disputed reefs. Last week, the People’s Liberation Army to fired four medium-range ballistic missiles into the disputed South China Sea.

There’s also space for escalation outside the military realm. China’s preferred means of retaliation against the U.S. and its allies usually involves so-called gray zone tactics that stop short of direct confrontation. One possible example: last year’s detention of two Canadians days after Canada’s arrest of a high-profile Chinese executive.

A similar situation with a U.S. citizen might pose a test for Washington.

“Even in the best-case scenario, to have frictions and problems of all kinds between them should be considered normal,” Gao, the ex-diplomat who’s now vice president of the Center for China and Globalization, said of the two countries. “China-U.S. dialogs and conversations of all kinds are especially important.”