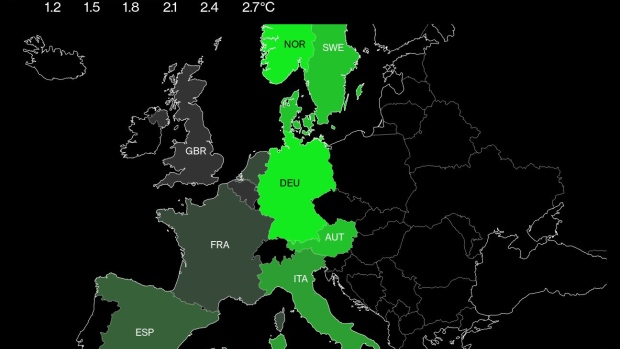 Lights illuminate the windows in residential properties in High Wycombe, U.K., on Monday, April 6, 2020. Among the decisions that my need to be made in U.K. Prime Minister Boris Johnson's absence are whether and when to tighten, extend or lift the current lockdown, which has seen all bars, restaurants and all non-essential shops closed, and people urged to work from home where they can. , Bloomberg

(Bloomberg) -- UK Prime Minister Liz Truss blocked an energy-saving campaign that was planned to help households reduce power and gas demand in the face of higher bills this winter.

The premier’s office rejected a £15 million ($16.8 million) public information program that had already been approved by Business Secretary Jacob Rees-Mogg, according to a person familiar with the matter, who didn’t want to be named as they’re not authorized to speak publicly.

Rees-Mogg’s campaign was set to advise people to lower the thermostats on their boilers, turn off radiators in empty rooms, and turn off the heating when they leave their homes. But Truss has long been opposed to what she calls the “nanny state,” and in her speech on Wednesday to the Conservative Party’s annual conference, she said: “I’m not going to tell you what to do, or what to think, or how to live your life.”

The block comes just as Britain’s grid operator warned that some customers face the risk of three-hour power cuts as the country heads into winter with the smallest margin of back-up power in seven years. That makes energy-saving measures even more important, especially as the government this winter is subsidizing every unit of power consumed by households. Cuts to energy-efficiency programs have left the country with one of the leakiest housing stocks in Europe.

Truss’s office didn’t immediately respond to requests for comment on the story, which was first reported by The Times. The Department for Business, Energy and Industrial Strategy said in a statement that it didn’t plan a publicity campaign, while stating “the UK has a secure and diverse energy system.”

“To strengthen this position further, we have put plans in place to secure supply and National Grid, working alongside energy suppliers and Ofgem, will launch a voluntary service to reward users who reduce demand at peak times,” the department said.

This month, UK household bills have jumped to fresh highs after Ofgem raised its regulatory price cap on energy prices. That means that even with government payments to help households cope with rising bills, unit costs are considerably higher than last winter.

The government’s independent adviser, the Climate Change Committee, this month issued a damning update on Britain’s greenhouse gas reduction efforts, saying the UK’s plans are unlikely to put it on track for its target of achieving net-zero emissions by 2050. It flagged buildings as an area with “significant risks,” and said that despite the public wanting action on the issue, “support and advice on energy efficiency and reducing energy waste are falling short.”