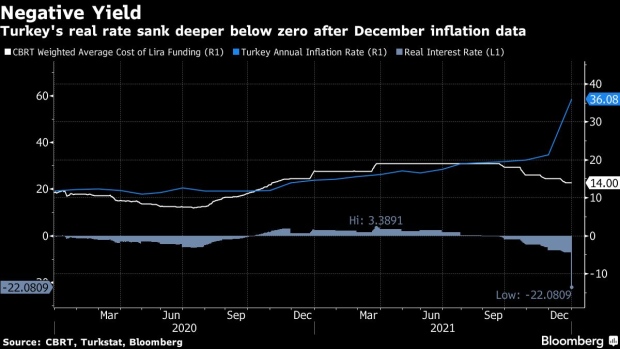 The Monetary Policy Committee held its one-week repo rate at 14% as forecast by all 20 analysts surveyed by Bloomberg.

While most emerging markets have begun tightening monetary policy in recent months to head off global price pressures, Turkey has cut rates by 500 basis points since September, an aggressive easing cycle demanded by Erdogan’s high-stakes bid to boost growth and reorient the economy toward manufacturing and exports.

Keeping rates on hold might have carried risks for the governor, Sahap Kavcioglu, as Erdogan has fired three governors since 2019 amid disagreements over the direction of Turkey’s monetary policy. But the president has softened his tone in recent comments, saying borrowing costs would fall gradually in 2022 and the lira would slowly strengthen.

Erdogan’s comments echoed those of Treasury and Finance Minister Nureddin Nebati, who told Bloomberg last week that policymakers would wait to see how the economy responds in the first quarter to the last round of easing.  The central bank had signaled last year that December’s rate cut would likely be the last of the current cycle.

The Turkish currency lost as much as half its value in three months before stabilizing after the government introduced emergency measures in December, including a program to compensate lira holders for major currency declines.

But the lira depreciation, combined with surging global energy prices, has already translated into soaring prices and a worsening outlook.

The inflation rate hit 36.1% in December. Inflation expectations for the next 12 months jumped to 25.37% from 21.39%, according to the central bank’s January survey of market participants. Some Wall Street banks predict last year’s currency crisis could push inflation beyond 50% although Nebati argues that it will peak early and at a far lower rate.

“Considering the steep price that they will have to pay in terms of FX reserves depletion, our base case is that policy rates are flattish at the current 14% level this year,” she said.

Kavcioglu will update the bank’s base-case scenario for inflation through 2022 and the following two years on Jan. 27. The central bank currently sees consumer-price growth ending 2022 at 11.8% according to its latest inflation report published in October.

The statistics agency will publish January inflation data on Feb. 3.