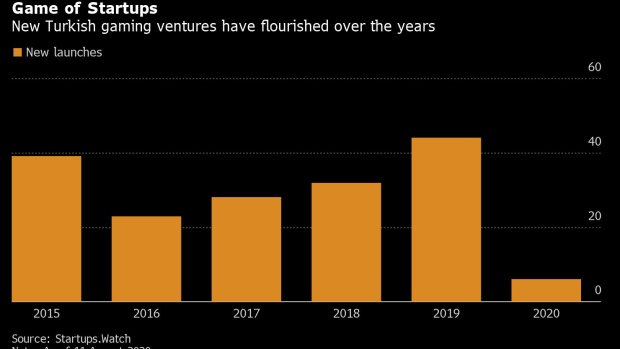 An attendee holds a mobile device while playing a video game during an Electronic Arts Inc. (EA) event ahead of the E3 Electronic Entertainment Expo in Los Angeles, California, U.S., on Saturday, June 9, 2018. EA announced that it is introducing a higher-end version of its subscription game-playing service that will include new titles such as Battlefield V and the Madden NFL 19 football game. Photographer: Patrick T. Fallon/Bloomberg , Bloomberg

(Bloomberg) -- Turkey’s mobile-gaming startups are seeking to cash in on a bout of deals, one of only a few bright spots in an economy hit by foreign portfolio outflows.

Games developers in Turkey attracted about $2.4 billion in investments over the past five years from the likes of Tencent Holdings, Netmarble Corp. and Zynga Inc. Their easy-to-play games have been downloaded hundreds of millions of times in a global sector expected to expand 9.3% this year to $160 billion, according to data compiled by Newzoo International BV.

“The interest will likely continue,” Ozgur Karayalcin, deputy chairman of the Ankara-based Association of Turkey’s Game Developers, said by phone.

A drop in the lira to a record against the dollar is boosting sales for developers that rely on international markets for most of their income. Lower costs and the ability of local firms to develop a game, test it and make it available for download within weeks are other draw cards, he said.

Zynga paid $168 million this month for 80% of Rollic Games, the Istanbul-based developer of Tangle Master 3D, among the most downloaded games in July, according to SensorTower Inc.

That’s the San Francisco-based firm’s second deal this year after acquiring Peak for $1.8 billion, creating Turkey’s first gaming unicorn. Peak’s Toon Blast had 600,000 downloads and earned $14 million in July, compared with 11 million downloads and $16 million for Candy Crush Saga, one of the most popular mobile games, according to SensorTower.

To be sure, excluding the big-ticket deals, about two dozen gaming startups have received only $2.8 million in investment since 2015, said Serkan Unsal, founder of Istanbul-based Startups.Watch, a firm that monitors new firms.

“Fostering that ecosystem attracts capital, creates well-paid jobs, and eventually tax-yielding profits,” said Roland Manger, the co-founder of Earlybird Venture Capital, which exited Peak after investing in 2011. “In five years, I can imagine that Turkey will be an even more significant hot spot of game creation and marketing.”