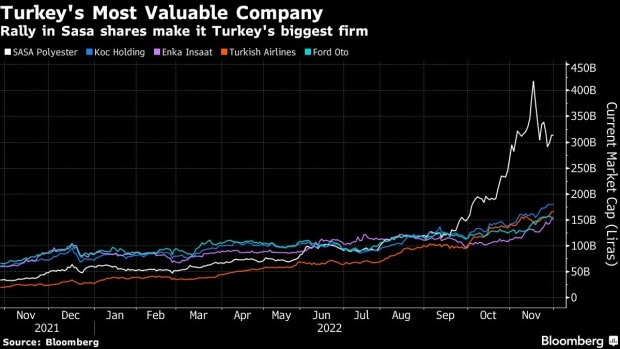 Shares of Sasa Polyester Sanayi AS have skyrocketed this year, making the polyester maker the country’s most valuable listed firm, yet even its chairman doesn’t know the cause and is questioning its bloated market value.

“I keep telling people that it’s too high and shouldn’t be purchased,” Ibrahim Erdemoglu told daily newspaper Ekonomi. He and others sold some stock when the price rose to 80 liras last month, prior to it soaring to a closing peak of 186.3 liras on Nov. 16. It has since retraced some of those gains, falling 9.9% to 125.9 liras in Wednesday trading.

At its peak, Sasa had gained 605% this year, echoing GameStop’s 688% surge during the meme stock frenzy of 2021. And as was the case with GameStop, the advance has fueled interest from retail investors and left market watchers baffled.

“Analysts haven’t been able to explain this price for a long time,” but Sasa has become “a phenomenon of some sorts” that attracted mom-and-pop buyers, said Tuna Cetinkaya, deputy chief executive officer at Info Yatirim in Istanbul. Cetinkaya sees the chairman’s comments as an effort to warn small investors, because “there’s a real possibility of pain for many.”

Turkish investors are no strangers to such wild fluctuations. In 2020, unprecedented levels of activity by local retail traders made two companies with free float rates below 1% the country’s largest listed firms by market capitalization. And a puzzling banking rally in summer months this year ended with a $14 billion rout. This year, Turkey has the world’s best-performing primary equity index, with the Borsa 100 rising 90% in US dollar terms, and 168% in local currency.

Just three years ago, Sasa, which Erdemoglu acquired from Sabanci Holding in 2015, commanded a market value less than 2% of its current level. The stock trades at 406 times its last annual earnings, according to Bloomberg data, compared with 6.2 times for Turkey’s benchmark Borsa Istanbul 100 Index.

For Erdemoglu, the price is “disturbing,” he said in the interview.