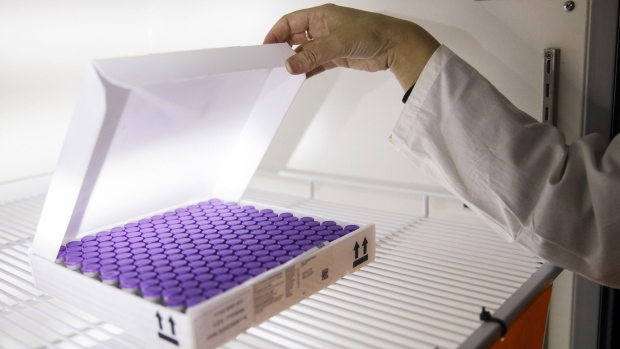 A nurse opens a box containing vials of the the Pfizer-BioNTech Covid-19 vaccine, stored in a refrigerator at the Wolfson medical center in Holon, Israel, on Saturday, Dec. 19, 2020. Israelis returning from the U.K., Denmark, and South Africa will be sent to isolation in government-run quarantine sites to help prevent a mutant strain of coronavirus from entering the country. , Bloomberg

(Bloomberg) -- Turkey signed an agreement with Pfizer Inc. partner BioNTech SE for 4.5 million of doses their coronavirus vaccine, with an option to raise it to 30 million.

Turkey made its first Covid-19 vaccine deal with Sinovac Biotech Ltd. for 50 million doses, saying it found the Chinese vaccine to be the safest as it’s manufactured using conventional methods. But the CoronaVac needs to be administered in two shots, which means the amount Turkey signed for will be enough only for 25 million of its citizens out of a population of more than 83 million people.

Most vaccines either consist of inactive pieces of a virus or proteins from a virus made through genetic engineering. When injected into the body, they trigger a lasting immune response similar to that of a person who has been infected and recovered.

By contrast, the mRNA technology being used by Pfizer and its partner BioNTech as well as Moderna Inc. relies on the body’s own cells to produce viral proteins. Once injected into the body, the RNA slips into human cells and tells them to make virus-like proteins, in this case the “spike” protein on the surface of the coronavirus.