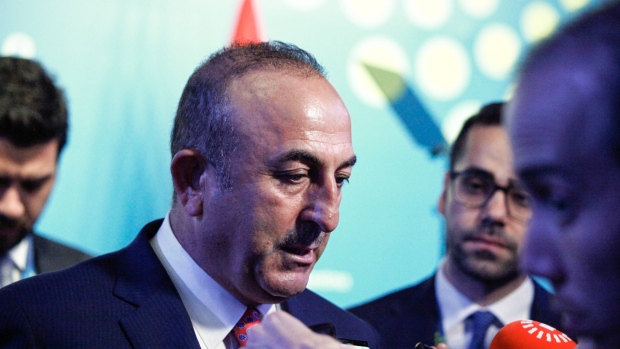 Mevlut Cavusoglu, Turkey's foreign affairs minister, speaks with members of the media before a press conference at the G-20 Leaders' Summit in Buenos Aires, Argentina, on Saturday, Dec. 1, 2018. Turkish President Recep Tayyip Erdogan said that the Saudi prosecutor who came to Turkey didn't share information and documents regarding the murder of Jamal Khashoggi , Bloomberg

Turkish Foreign Minister Mevlut Cavusoglu will travel to Israel this week as the two countries pursue a nascent thaw in relations after more than a decade of tensions.

Cavusoglu will meet his Israeli counterpart, Yair Lapid, on Wednesday, a day after holding talks with Palestinian officials, in the first visit by a Turkish foreign minister in 15 years. The ministers are expected to discuss upgrading diplomatic links to the level of ambassador.

Turkey has sought to reset its ties with Israel and the Arab world, including Saudi Arabia, in recent months as it looks to bolster a floundering economy that threatens to erode support for President Recep Tayyip Erdogan ahead of elections next year. The diplomacy is also part of a broader realignment that’s seen regional rivals heal rifts and step back from conflicts since US President Joe Biden took office.

Relations between Israel and Turkey nosedived after 2010, when a Turkish flotilla bound for the Gaza Strip was raided by Israeli commandos, resulting in the deaths of 10 civilians. Ankara has been critical of Israel’s policies toward the Palestinians and Israel has charged Turkey of supporting Hamas, the Islamic militant group that rules the Gaza Strip.

Turkey expelled the Israeli ambassador to Ankara in May 2018 and recalled its own envoys from Israel and the US after Israeli soldiers killed nearly 60 Palestinians protesting the transfer of the American embassy to Jerusalem from Tel Aviv. While Turkey’s envoy returned to Washington about two weeks later, Turkey and Israel have conducted diplomatic contacts at the level of charge d’affaires ever since.

As ties improved, Turkey signaled it wants to revive negotiations on a planned pipeline that would carry natural gas from the eastern Mediterranean to Europe via Turkey.

A group of nations including Egypt, Cyprus, Greece and Israel are cooperating on producing and transporting gas discovered in the region, but Turkey’s exploration activities in contested Mediterranean waters have largely left it out in the cold.