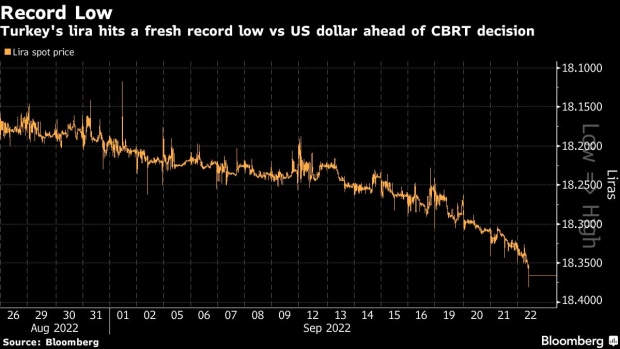 An electronic board displays exchange rates information at a currency exchange bureau in the Eminonu district of Istanbul, Turkey, on Tuesday, Sept. 20, 2022. Key Turkish banks are buying back shares after stocks reversed an unprecedented rally last week, providing relief for brokerages hit by the rout. , Bloomberg

(Bloomberg) -- Turkey’s lira fell to a fresh record low after the central bank delivered a second surprise cut to interest rates, and as a hawkish Federal Reserve increases pressure on emerging market currencies.

Read: Turkey Shocks With Another Rate Cut Despite Raging Inflation (2)

Turkey’s unconventional monetary policy has left it with the world’s most negative interest rates when adjusted for inflation, which surpassed 80% last month. The lira is among this year’s worst performers in emerging markets.

The fresh record low in the Turkish currency came after the nation’s Monetary Policy Committee led by Governor Sahap Kavcioglu lowered the benchmark rate to 12% from 13% on Thursday, a second consecutive surprise move after August’s reduction caught analysts off-guard. Thursday’s cut was only anticipated by five of the 22 analysts surveyed by Bloomberg.

More rate cuts are likely in coming months due to the challenges to economic growth in the region, said Societe Generale’s Marek Drimal, who was expecting a 50 basis points cut today. “However, weakening pressures in the lira market are likely to become more pronounced after the summer tourist season,” Drimal said, anticipating the USD/TRY pair hitting 22 by the end of the year.

The lira was already on a weaker footing versus the dollar following the Federal Reserve’s move Wednesday to raise its benchmark rate by 75 basis points, as it signaled further aggressive tightening.

“Broadly speaking, the Fed hike does reinforce the strong USD trend globally,” said Todd Schubert, head of fixed-income research at Bank of Singapore Ltd. “However, the lira has its own negative feedback loop which is the unorthodox policy of the Turkish central bank, which is exacerbating TRY weakness.”

The lira weakened about 28% this year, the second-worst performing emerging-market currency after the Argentine peso.