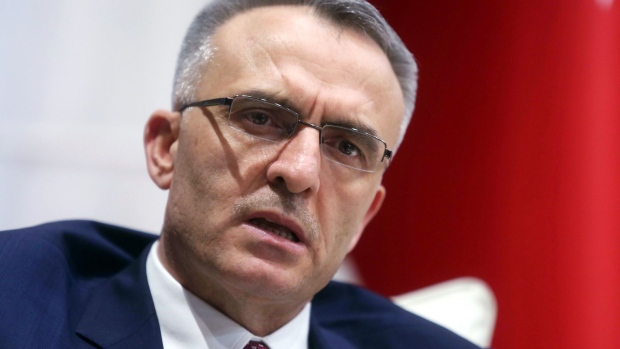 Naci Agbalspeaks during an interview in Ankara, Turkey, on Thursday, March 2, 2017. , Source: Bloomberg/Bloomberg

Turkey’s stocks, bonds and the lira tumbled as the shock dismissal of the country’s central bank chief triggered concern the country is headed for a fresh bout of currency turbulence.

In one of the sharpest sell-offs in years, the Borsa Istanbul Index lost more than 8%, triggering circuit breakers that halted trading. The lira weakened almost 15% while yields on Turkish local and dollar bonds soared.

The turmoil underscores concern President Recep Tayyip Erdogan’s removal of Naci Agbal after just four months as governor marks an end to a period of policy orthodoxy that had briefly restored the lira’s fortunes after a 20% retreat last year. Agbal’s successor, Sahap Kavcioglu, a columnist and university professor, has been a critic of the recent interest-rate increases enacted under Agbal’s stewardship, including last week’s larger-than-expected hike.

A “haze of volatility” has returned to Turkish markets, Stephen Innes, chief global market strategist at Axicorp Financial Services Pty Ltd. in Sydney, wrote in a note Monday. “The market had been warming up to a more normalized monetary policy since November. This move is a big blow to these hopes.”

The lira’s decline put it within a few percentage points of a record low reached on Nov. 6, the day before Agbal was appointed. It was trading at 7.966 to the dollar at 10:36 a.m. in Istanbul after weakening to 8.4707 in early Asian hours, when liquidity for emerging-market currencies tends to be thinner.

The decision to fire Agbal, who had sought to restore the central bank’s credibility, raises concerns that the country will again prematurely ease interest rates. Before Agbal, investors frequently criticized Turkey’s monetary authority as being too quick to undo tightening and too slow to respond to risks, most recently in August 2018, when the lira lost about a quarter of its value.

Some 875 basis points of interest-rate increases since Agbal’s November, including Thursday’s 200 basis-point increase, had helped made the lira the best carry-trade currency this year, bringing foreign capital back into Turkish markets.

A rush to sell the currency as markets reopened Monday overwhelmed support for the lira from state banks, according to a foreign-currency trader familiar with the transactions who isn’t authorized to speak publicly and asked not to be identified.

Treasury and Finance Minister Lutfi Elvan said Monday Turkey will continue to stick to free markets and a liberal foreign-exchange regime. The government will continue to prioritize price stability, and fiscal policies will support the monetary authority in its efforts to rein in inflation, he said on Monday.

“Markets can take some encouragement from recommitment to no capital controls and fact that state banks and presumably central bank have been selling dollars and have got the lira back below 8,” said Timothy Ash, a strategist at BlueBay Asset Management in London. “I expect massive state bank intervention in the short term to hold a line on the lira.”

The sell-off on Turkey’s Istanbul 100 Index reversed this year’s gains. The Borsa Istanbul Banks Index, in which foreigners have a larger presence, fell 9.1%. The yield on Turkey’s benchmark 10-year local-currency bond rose 343 basis points to 17.49%, while 10-year benchmark dollar bond yield was up 160 basis points at 7.56%.

“Bulls’ optimism was based on the CBRT being allowed to keep rates high for some time, and after last Thursday that looked very promising,” said Henrik Gullberg of Coex Partners Ltd., who previously saw the lira appreciating beyond 6.90 per dollar. “That’s ruined now; it will be hard to find lira bulls,” he said, adding that the currency could now head back to levels when Agbal was appointed.

Kavcioglu pledged on Sunday to use monetary-policy tools effectively to deliver permanent price stability. He also said the bank’s rate-setting meetings will take place according to schedule.

Kavcioglu is a professor of banking at Marmara University in Istanbul and a columnist at the pro-government Yeni Safak newspaper. The paper criticized the monetary authority’s latest interest-rate increase on its front page on Friday, saying the decision “turned a deaf ear” to Turkey’s 83 million people, would hurt economic growth and primarily benefits “London-based owners of hot money.”

In a column published by Yeni Safak on Feb. 9, Kavcioglu said it was “saddening” to see columnists, bankers and business organizations in Turkey seeking economic stability in high interest rates at a time when other countries had negative rates. He also seconded Erdogan’s unorthodox theory on the relationship between interest rates and inflation, saying that raising interest rates would “indirectly open the way to increasing inflation.”

Most economists think the opposite is true.

Last year, Turkish banks spent more than US$100 billion of the nation’s foreign reserves to support the currency, according to a report by Goldman Sachs Group Inc. That prompted calls by Turkish opposition lawmakers for a judicial probe into the official reserves.

In comparison, foreign investors purchased a net US$4.7 billion worth of stocks and bonds in the months following Agbal’s appointment. Overseas inflows to Turkey through swaps totaled about US$14 billion during that period, Istanbul-based economist Haluk Burumcekci said.

The lira had strengthened under Agbal’s watch as he ended a complicated funding structure and pledged to ensure price stability. His 200 basis-point interest-rate hike on Thursday was double what was expected in a Bloomberg survey.

“The hit to the central bank’s credibility and independence can’t be overstated. Erdogan has battered the institution with interventions that have repeatedly backfired. Financial markets were willing to give Agbal a chance, his successor will find it hard to build that trust again.”

The lira’s weakness could add to inflationary pressures building in the economy and erode Turkey’s real rate, currently the highest in emerging markets after Egypt’s.

While Turkey’s high nominal rates are a lure for yield hunters, its mercurial inflation and the perception that central-bank policy has been too loose has made the lira one of the most volatile currencies in the world.

Among those who find themselves on the wrong side of the trade are Japanese retail investors. Long positions made up almost 86% of the total lira-yen positions traded on the Tokyo Financial Exchange on Friday, the most among 14 major currency pairs, based on the latest data compiled by Bloomberg.

“We will never know how successful Agbal’s approach could have been, but initial signs were positive,” said Emre Akcakmak, a portfolio adviser at East Capital in Dubai, who anticipates a reversal on some of the recent hot money inflows.

“Even when the market stabilizes after a while, investors will have little tolerance, if any, in case the new governor prematurely cuts the rates again,” Akcakmak said.

--With assistance from Lilian Karunungan.