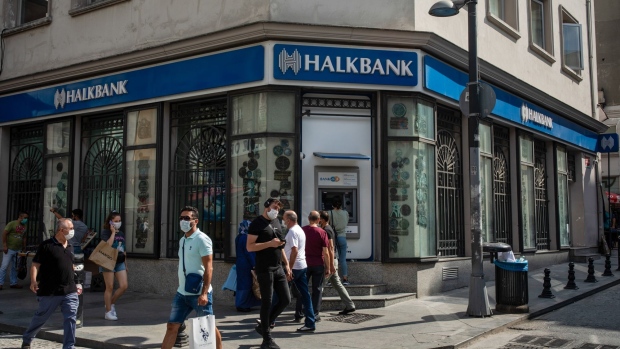 Pedestrians pass a bank branch of Turkiye Halk Bankasi AS in the Sirkeci neighborhood of Istanbul, Turkey, on Thursday, Aug. 27, 2020. Economic activity fell faster and deeper in emerging markets than in advanced economies as the Covid-19 shock hit, and the recovery is proving slower and shallower. Photographer: Nicole Tung/Bloomberg , Bloomberg

Turkey’s state lenders will follow the central bank’s shock interest-rate cut of 200 basis points and offer cheaper commercial loans, looking past market turmoil to deliver a boost for the economy.

In a joint statement on Monday, the nation’s three largest state-owned banks said they will cut corporate loan rates by as much as 200 basis points, depending on products and maturities. The weighted average interest rate for commercial loans was just above 20% as of Oct. 15, according to central bank data.

The announcement underscores the resolve by policy makers to keep credit flowing through Turkey’s $765 billion economy even after the lira sank to its weakest levels against the dollar and as risks mount in the financial system. Turkey’s currency has lost 24% against the greenback this year.

TC Ziraat Bankasi AS, Turkiye Vakiflar Bankasi and Turkiye Halk Bankasi AS said in the statement that they would also start offering mortgages at a monthly 1.29% for loans below 1 million liras ($102,478) and 1.34% for those over 1 million liras. Annual inflation was running at nearly 20% as of end-September.

Boosting the economy through credit is a policy long favored by President Recep Tayyip Erdogan’s government. Following an attempted coup in 2016, it introduced the Credit Guarantee Fund, through which companies could access borrowing backed by the government. The approach eventually backfired as new credit caused the economy to overheat and contributed to the lira’s crash in August 2018.

The government has followed the same route to ease the impact of the coronavirus pandemic. The central bank cut its benchmark rate by 300 basis points to 16% over its last two meetings -- including last week’s bigger-than-expected move -- as Erdogan urged lower borrowing costs to boost economic growth.

The volume of commercial loans is up 9% this year, while consumer loans grew 12%, according to official data.