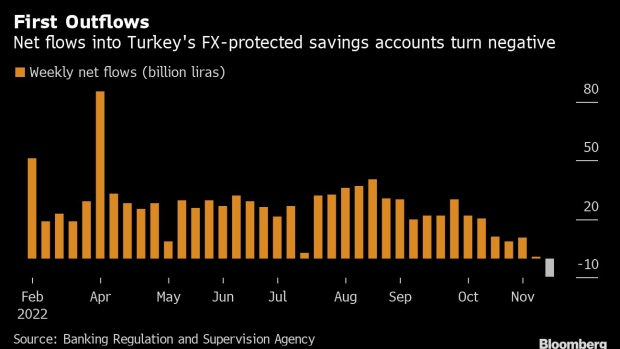 Foreign currency-protected deposits fell 0.6% to 1.46 trillion liras ($78.6 billion) in the week to November 18, according to data published by banking regulator BDDK.

The outflows from the program come after the Turkish lira stabilized around a record low in recent months, with the one-month implied volatility against the dollar at its lowest level in more than two years. The currency was 0.1% stronger at 18.6358 per dollar, holding on to a 29% decline this year.

Launched in December 2021 to curb demand for dollars, the savings program promises a state-guaranteed return on lira deposits that matches or beats any decline against the greenback. The accounts were so popular they now represent 34% of all lira-denominated deposits in the country.

“The decline in interest rates on the back of the Turkish central bank’s policy rate cuts erodes the relative advantage of the scheme. This will curtail the inflow of reserves from the scheme to the central bank as well.”

Their uptake helped to stabilize the currency but prompted criticism from the opposition over the financial burden it imposes on the state. The Central Bank and Treasury and Finance Ministry had paid savers almost 150 billion liras as of late-October.

The central bank on Thursday lowered its benchmark rate to 9% from 10.5%, marking the end of an easing cycle after cutting rates by 500 basis points since August.