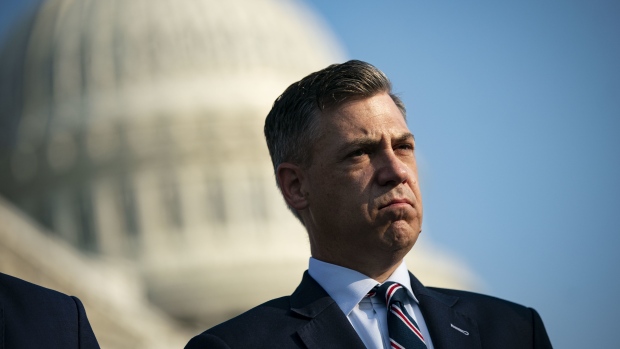 Representative Jim Banks, a Republican from Indiana, listens during a news conference before a hearing for the Select Committee to Investigate the January 6th Attack on the U.S. Capitol in Washington, D.C., U.S., on Tuesday, July 27, 2021. Seven House Democrats and two Republicans today launch what they say will be the fullest investigation yet of the Jan. 6 insurrection at the U.S. Capitol, an inquiry that could drag the issue into next year's midterm election campaign. , Bloomberg

(Bloomberg) -- Twitter Inc. suspended Representative Jim Banks’ official account for calling Dr. Rachel Levine, the Assistant Health and Human Services Secretary, a man.Banks, a Republican from Indiana and a top conservative in the House of Representatives, violated Twitter’s terms of service, which bars users from harassing people based on their gender identity. He made the comment in a tweet referencing that Levine, a transgender woman, would be sworn in as a four-star admiral in the U.S. Public Health Service Commissioned Corps. Levine will be the first woman to reach that rank.

“The title of first female four-star officer gets taken by a man,” Banks said in the tweet, which Twitter removed on Saturday for violating its rules.Twitter bars users from attacks based on race, ethnicity, national origin and gender identity, among other reasons. Its rules state that misgendering transgender individuals is prohibited.On his personal account Banks was defiant. He tweeted that his official account had been suspended because he posted a fact without specifying what he wrote. He added, “I won’t back down.”

Banks is chairman of the Republican Study Committee, a caucus of conservative House Republicans that helps the party craft its policies. Previous chairmen, whose ranks come from sitting members, include former Vice President Mike Pence, when he represented Indiana’s 6th District in Congress, and Representative Steve Scalise of Louisiana, the second-ranking Republican.