Canada recently made headlines around the world when Chrystia Freeland was named the country’s first female finance minister.

“I’d like to say to all the Canadian women across our amazing country who are out there breaking glass ceilings, keep going. We are 100 per cent with you,” Freeland told reporters in Ottawa, shortly after being sworn in.

In Corporate Canada, however, companies continue to move slowly in elevating women to CEO roles.

“It’s alarming and discouraging,” Kelly Blair, a partner at Toronto-based executive search firm Caldwell Partners, told BNN Bloomberg in an email. “We’re starting to see more women in senior roles, but if you don’t have depth in your leadership ranks, this isn’t a problem that gets solved overnight.”

A BNN Bloomberg review of the 100 most influential companies within the S&P/TSX Composite Index revealed just two female chief executives: Ann Fandozzi, who was named CEO of Ritchie Bros. Auctioneers Inc. in December 2019; and Marie Inkster, who was named CEO of Lundin Mining Corp. in October 2018.

“It is disappointing to me that we still have a need to discuss the issue of gender equity,” said Carol Stephenson, a director at General Motors Co. and Maple Leaf Foods Inc. and former dean of the Ivey Business School, in an email to BNN Bloomberg.

“I spent four decades in business and it was an issue then. There has been exhaustive research on the topic and very practical recommendations to solve the issue. It begs the question, if we know what to do, why haven’t the numbers changed?”

At that time, there was only one woman among the 100 most influential companies in the S&P/TSX Composite Index: Nancy Southern, who at the time was running Calgary-based Canadian Utilities Ltd. Southern has since stepped down from that CEO role, although she remains its executive chair while also serving as chair and CEO of ATCO Ltd., which controls Canadian Utilities. 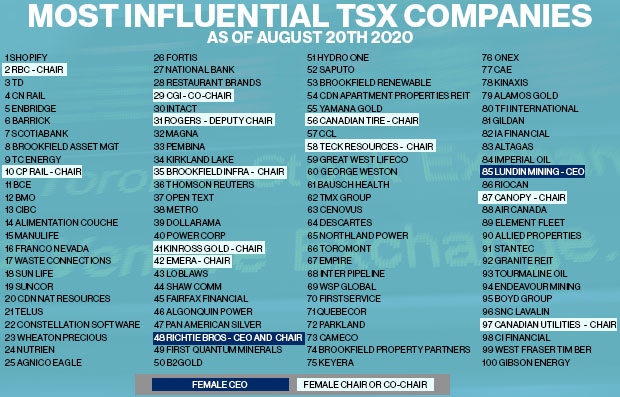 The makeup of the 100 most influential TSX companies has changed since 2018 since it is based on the performance of stocks within the index. But the lack of female chief executives remains constant.

“Unfortunately, all the diversity efforts that have taken place over the last decade have not resulted in the changes many of us would have hoped for,” Camilla Sutton, president and CEO of Women in Capital Markets (WCM), told BNN Bloomberg in an email.

“The representation data for women and racialized persons at the board, CEO and executive levels are still abysmal. The lack of progress suggests we need a new and innovative approach that really attacks the systemic issues and barriers embedded in our organizations.”

Sutton says companies must increase diversity literacy in their employee base, introduce targets at all levels, eliminate harassment and discrimination, and increase transparency in their reporting.

Similar themes have surfaced during the recent dialogue surrounding systemic racism in Corporate Canada: for example, the lack of internal data being collected on employees, based on race and ethnicity.

“Some companies are still not even doing that. And that’s required to be reviewed in order for you to have a real understanding about where is this glass ceiling that is stopping black professionals from moving up in your company,” Meryl Afrika, president of the Canadian Association of Urban Financial Professionals (CAUFP), told BNN Bloomberg in June.

It has been more than six years since Canada’s biggest securities regulator, the Ontario Securities Commission (OSC), unveiled a comply-or-explain rule, requiring most TSX-listed companies to disclose how many women are on their board and in executive roles.

As of last year, the total number of board seats occupied by women in Canada stood at 17 per cent, according to a report by the Canadian Securities Administrators. That compares to 11 per cent in 2015.

“I think boards of directors have made progress but there are still very few chairs of boards that are populated with women,” Carol Stephenson told BNN Bloomberg.

In fact, BNN Bloomberg’s review of the 100 most influential TSX companies reveals a much lower percentage of women serving in the chair role, compared to serving on the board itself: 10 of the 100 companies identified by BNN Bloomberg currently have a woman serving as board chair or co-chair. That’s a modest improvement from six women in 2018. Companies on the list include Royal Bank of Canada, Canadian Pacific Railway Ltd., Canadian Tire Corp. and Emera Inc. Earlier this year, Teck Resources Ltd. and Canopy Growth Corp. named Sheila Murray and Judy Schmeling to their respective chair roles.

What’s also startling about the slow progress is that top investors have been calling on the Canadian companies they invest in to make swift changes.

In 2017, a group of Canadian institutional investors managing more than $2 trillion in net assets publicly pushed for 30 per cent representation of women on boards and executive management teams of S&P/TSX Composite Index companies by 2022.

“Boards have been putting way more pressure on their organizations in the past six months,” said Caldwell search executive Kelly Blair. “We’re seeing in our searches a real demand for diversity.”

One major hurdle, meanwhile, could be COVID-19. While companies have proven in recent months that they can move quickly to change when they need to, the pandemic has threatened to derail years of progress for women in the workforce.

Veteran board member Carol Stephenson says that fact is all the more reason not to lose sight of the objective to even the playing field in Corporate Canada.

“There are some signs that COVID-19 may impact women in business more than men. I hope our pipeline of talented women does not shrink as a result of COVID-19.”