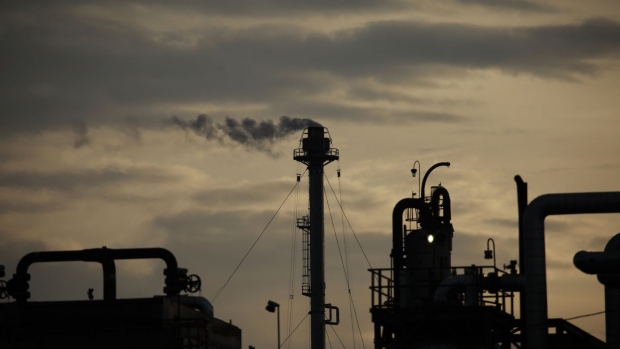 Emissions rise from the BP Plc Whiting Refinery in Whiting, Indiana, U.S., on Sunday, Oct. 10, 2021. Oil demand is set to increase by an average of almost 4 million barrels a day in 2021 vs. a low, pandemic-driven 2020 level. Photographer: Luke Sharrett/Bloomberg , Bloomberg

(Bloomberg) -- The U.K. will join the U.S. in releasing more oil from its reserves as part of a joint effort to lower prices and reduce reliance on Russian supplies, two people familiar with the matter said.

An announcement is likely on Friday via the International Energy Agency, according to one of the people, who declined to say the size of the release, citing market sensitivity and the need for countries to act in concert. Both people requested anonymity because the announcement hasn’t yet been made.

U.S. President Joe Biden on Thursday said his plans to release a million barrels of oil a day for six months would lay the foundations for the U.S. to achieve energy independence from foreign suppliers. He also said he expected allies to release as many as 50 million barrels from their own stocks.

For comparison, a month ago, IEA members agreed on a 61.7-million barrel release, with 30 million coming from the U.S. and 2.2 million from the U.K.