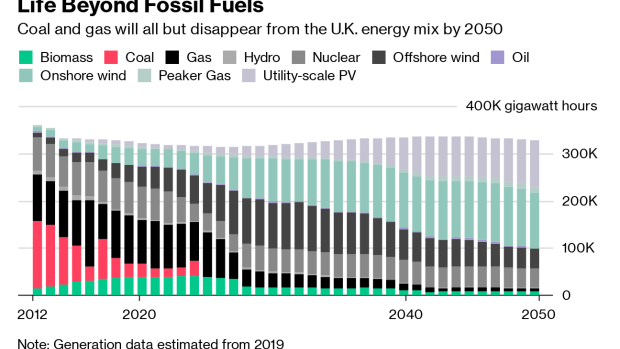 (Bloomberg) -- In National Grid Plc’s analysis of Britain’s worst blackout in a decade, one bit of jargon appears throughout that few outside of the power industry will be familiar with.

It’s “inertia” and it plays a vital role in keeping your lights on. Described by Isaac Newton in his first law of motion back in 1686, it’s the concept in physics whereby a moving object will keep moving until a force such as friction causes it to do otherwise, or an object at rest will stay at rest.

Any power plant with moving parts has inertia. For example, coal is burned to produce steam to operate a turbine that generates electricity. That heavy, turning mass has inertia, which will continue to spin for a while even if the coal suddenly stops burning.

The inertia from conventional power plants helps grid operators smooth over frequency changes and is a key tool in helping balance supply and demand. The trouble is, the increasing amount of renewable energy sources on the grid don’t have much inertia. When the sun stops shining, solar panels stop producing power immediately.

“Today, we operate the system with lower levels of inertia than we have in the past,” National Grid said in its report on the Aug. 9 blackout published by Ofgem on Tuesday. “In low inertia conditions the system frequency is likely to move faster in response to a disturbance such as a loss of generation or increase in demand.”

National Grid said operating in low inertia conditions is already the “new normal,” but it’s looking at ways to adapt further to the changing energy mix. These include a project looking at how new sources of inertia can be provided, inertia monitoring services and new frequency response measures.

To contact the reporter on this story: Andrew Reierson in London at areierson1@bloomberg.net

To contact the editors responsible for this story: Reed Landberg at landberg@bloomberg.net, Lars Paulsson, Rob Verdonck