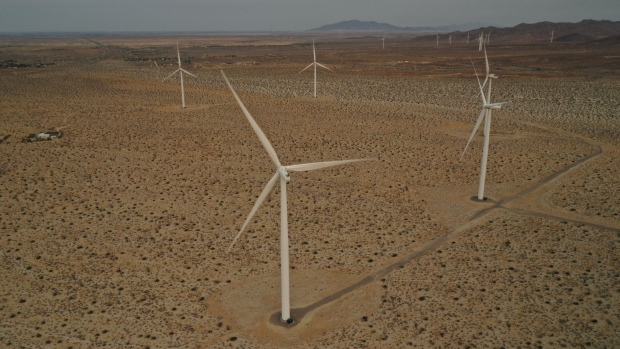 2.37 MW (megawatt) wind turbines, manufactured by Siemens AG, are seen in this aerial photograph taken at the Ocotillo Wind Farm, a 265 MW facility, near Ocotillo, California, U.S. on Friday, Sept. 11, 2020. As the threat of blackouts continues to plague California, officials are pointing to battery storage as a key to preventing future power shortfalls. But the Golden State is going to need a lot more batteries to weather the next climate-driven crisis—let alone to achieve its goal of a carbon-free grid. Photographer: Bing Guan/Bloomberg , Bloomberg

The company hopes to attract millions of customers as it gets a foothold in the Texas market. It’s the latest step in Octopus’s plan to expand globally, driving down consumer prices with low-cost renewable power.

Evolve Energy is a tiny player in the U.S., with fewer than 1,000 customers, Octopus’s Chief Executive Officer Greg Jackson said in an interview. But by acquiring the company for $5 million, Octopus has a way into its first American market in Texas. From there, the Octopus plans to expand to more states over the coming years.

“Texas is an entry point to the U.S.,” Jackson said. “It’s the one that lets us deploy a retail model that looks very much like the one that’s been successful in the U.K.”

Octopus Energy launched in the U.K. in 2016 and is majority owned by the London investment group Octopus Capital Ltd. The company has gained about 1.7 million customers, successfully taking customer share from traditional utilities with cheaper, more flexible prices and offering clean energy.

Octopus follows another U.K. power provider Bulb Energy Ltd., which announced last year that its own renewable power brand would start in Texas.

Key to Octopus’s growth is a cloud-computing platform known as Kraken that helps automate processes such as customer service, trading power on the wholesale market and forecasting power consumption.

Beyond its own customers, Octopus contracts with other companies to use the platform. Jackson said he’s already in discussion with “large U.S. utilities,” to license Kraken in the future. He estimates those deals will bring Octopus another 20 million customers within four years.