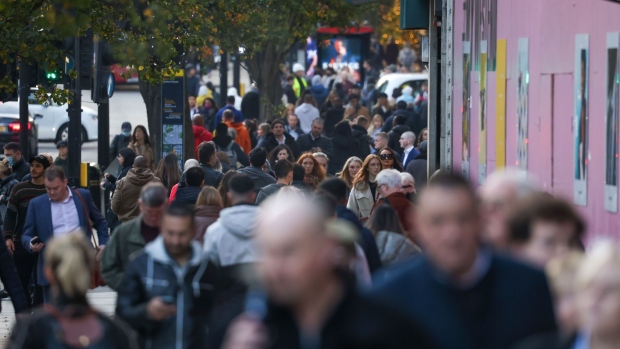 Shoppers walk along Oxford Street in London, U.K., on Wednesday, Nov. 17, 2021. The U.K. Office for National Statistics are due to release their latest retail figures on Friday. Photographer: Hollie Adams/Bloomberg , Bloomberg

Total sales in stores and online were 4.1% higher than in the same month of 2019, the British Retail Consortium and KPMG said. Separate data from Barclaycard showed overall consumer spending jumped by 16%.

The findings reinforce a picture of buoyant consumer confidence, though both surveys highlighted the threat posed by the new omicron variant of Covid-19 as the government comes under mounting pressure to impose fresh restrictions to contain the outbreak.

There was also a warning about inflation. Barclaycard found that almost nine in 10 consumers were worried about rising energy bills and other household expenses, while the BRC said rising costs meant retailers had little room to repeat the big New Year price cuts seen in previous years.

“Rising inflation, which could top 4%-plus by the end of this year, is likely to prompt an interest-rate rise sooner rather than later, which could dent consumer confidence and spending,” said Paul Martin, head of retail at KPMG.

In November, people snapped up clothing and jewelery as they sought to avoid potential supply shortages, according to the BRC-KPMG report. Spending was also given a boost by discounted clothing as Black Friday offers extended beyond electronics and household appliances.

“The arrival of Christmas markets and lights across the U.K. brought some festive cheer to the retail, leisure and hospitality sector in November, while the return of darker nights and colder evenings saw brits spending more on at-home pursuits such as takeaways and home entertainment,” said Jose Carvalho, head of consumer products at Barclaycard.