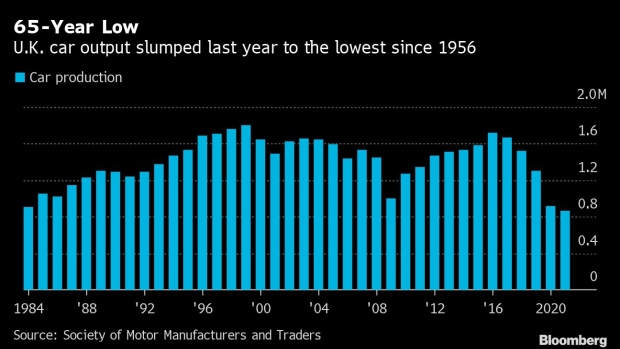 (Bloomberg) -- Automakers had their worst year in the U.K. since 1956 after the global semiconductor shortage, pandemic-related staffing issues and the closing of a key Honda Motor Co. factory hammered output.

Production fell some 7% to less than 860,000 cars in 2021, the fewest in more than six decades and about a third below pre-pandemic levels, the Society of Motor Manufacturers and Traders said Thursday.

The trade group expects a rebound to more than 1 million units this year as the components bottleneck eases and automakers from Stellantis NV to Nissan Motor Co. start retooling their U.K. factories to make them fit for electrification.

“Despite this miserable year, there is optimism,” Mike Hawes, SMMT’s chief executive officer, said in a statement. “Investments have been unleashed, most of which will help transform the sector to its zero-emission future.”

Bentley Motors Ltd. this week announced plans to spend 2.5 billion pounds ($3.4 billion) over the coming decade to electrify its lineup and modernize its factory in Crewe, England. Both Nissan Motor Co. and Stellantis NV last year said they’ll turn their plants in Sunderland and Ellesmere Port into EV-making hubs. Only Honda in mid-2021 went ahead with a long-planned closing of its site in Swindon that employed more than 3,000 people.