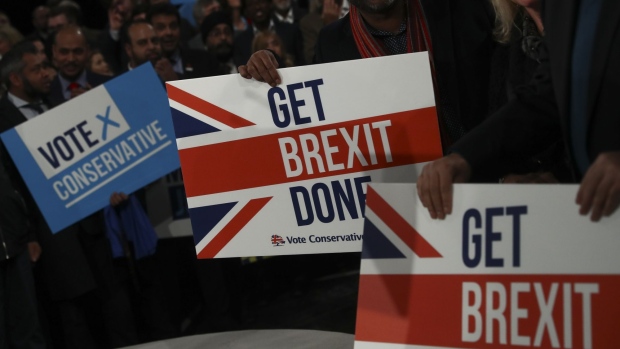 Supporters hold placards ahead of the official launch of the Conservative Party's general election campaign at the National Exhibition Centre in Birmingham, U.K., on Wednesday, Nov. 6, 2019. U.K. prime minister Boris Johnson said he'll be able to get his Brexit deal through Parliament in "a few weeks" if his Conservatives win a majority. , Bloomberg

(Bloomberg) -- The U.K.’s sovereign credit rating was placed on negative outlook by Moody’s Investors Service, which said the country’s ability to set policy has weakened in the Brexit era along with its commitment to fiscal discipline.

The rating company affirmed Britain’s Aa2 long-term issuer and senior unsecured ratings. The decision comes as the U.K. is in the midst of an election campaign that is likely to determine the future of Brexit.

“The increasing inertia and, at times, paralysis that has characterized the Brexit-era policymaking process has illustrated how the capability and predictability that has traditionally distinguished the U.K.’s institutional framework has diminished,” Moody’s said in a statement.

“The decline in institutional strength appears to Moody’s to be structural in nature and likely to survive Brexit given the deep divisions within society and the country’s political landscape,” Moody’s added.

While the election will have a big impact on Brexit, this week has seen both sides escalate their spending pledges, drawing election battle lines with plans to end a decade of U.K. austerity.

Chancellor of the Exchequer Sajid Javid said Thursday he’ll jettison the existing fiscal rules, allowing the Conservative government to devote an extra 20 billion pounds ($26 billion) a year to capital projects such as railways and roads if Johnson’s party is re-elected. That commitment was immediately dwarfed by Labour’s Shadow Chancellor John McDonnell, who promised an additional 55 billion pounds a year in the first term of a Labour government.

There hasn’t been a U.K. downgrade by a major rating company in over two years. It is currently rated AA, the third-highest investment grade, at S&P Global Ratings and AA- at Fitch Ratings. Both have the country on negative watch.

To contact the editors responsible for this story: Paul Gordon at pgordon6@bloomberg.net, Hari Govind