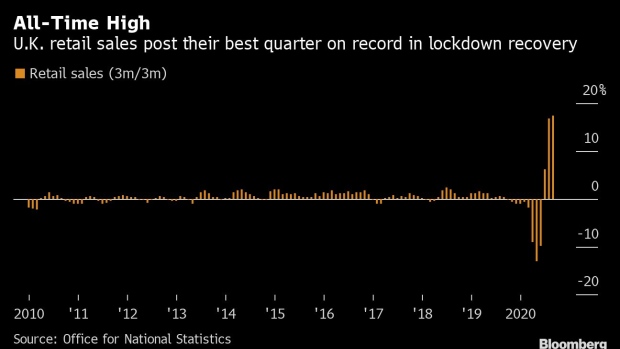 A driver for Ocado Group Plc delivers groceries in the Bow district of London, U.K., on Wednesday, Sept. 30, 2020. Covid-19 lockdown enabled online and app-based grocery delivery service providers to make inroads with customers they had previously struggled to recruit, according the Consumer Radar report by BloombergNEF. Photographer: Hollie Adams/Bloomberg , Bloomberg

The volume of goods sold in stores and online gained 1.5% from August, the Office for National Statistics said Friday, beating economists estimates for a reading of 0.2%. Sales were 17.4% higher in the third quarter following a lockdown-induced slump in the previous period.

While the report will be welcome for policy makers hoping to support the economy going into winter, there are already signs that rising unemployment and the prospect of a messy divorce from the European Union at the end of the year.

Household confidence was starting to retrench even before the virus flared up again, forcing many areas into renewed restrictions, a report by GfK showed Friday. The number of job cuts jumped the most on record in the June-August quarter.

Nevertheless, retail sales in September were 5.5% higher than in February, before the pandemic struck. They were led by home improvement items and garden centers. Grocery stores also saw an increase, while clothing sales dropped.

Online sales were particularly strong, rising to 27.5% of the total compared with 20.1% in February. Amazon.com Inc. has said it will hire an additional 7,000 people for permanent jobs in the U.K. this year to deal with the surge in demand.

On Thursday, Chancellor of the Exchequer Rishi Sunak announced a significant increase in U.K. government support, including more wage subsidies and grants for businesses. Most of the generous job-supporting measures introduced at the height of lockdown are due to expire this month.

Even so, Rolls-Royce Holdings Plc has announced it’s moving jobs to Singapore. HSBC Holdings Plc is restructuring to cut its workforce by 35,000 over the next three years. Cineworld Group Plc is closing its cinemas as moviegoers are forced to stay home.

September was “Probably this year’s peak, given the outlook for falling incomes and renewed lockdowns,” said Samuel Tombs, an economist at Pantheon Economics.

Several Bank of England policy makers say they stand ready to increase stimulus to support the economy. The next decision falls on Nov. 5.