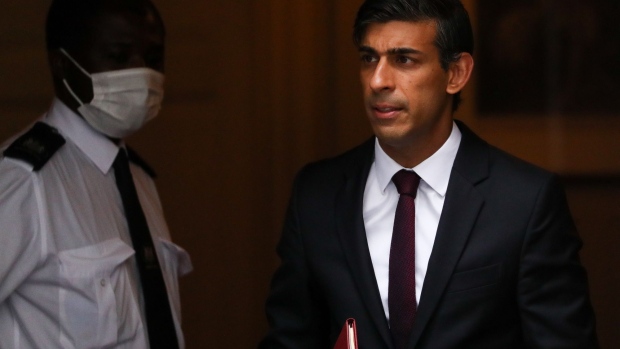 Rishi Sunak, U.K. chancellor of the exchequer, departs number 11 Downing Street on his way to present his 'Winter Economy Plan' at Parliament in London, U.K., on Thursday, Sept. 24, 2020. Sunak will set out a new crisis plan to protect jobs and rescue businesses as the coronavirus outbreak forces the U.K. to return to emergency measures. Photographer: Simon Dawson/Bloomberg , Bloomberg

U.K. Chancellor of the Exchequer Rishi Sunak signaled he is optimistic that a Brexit trade agreement with the European Union will be reached.

Speaking to the BBC’s Andrew Marr show on Sunday, he said “hopefully” negotiations will end in a “constructive” place.

He was clear that in the “short term,” failure to get a trade agreement with the bloc would be a problem. A deal that comes into force when the Brexit transition period ends on Dec. 31 would be “preferable,” he said, but added: “We should not be going for a deal at any price.”