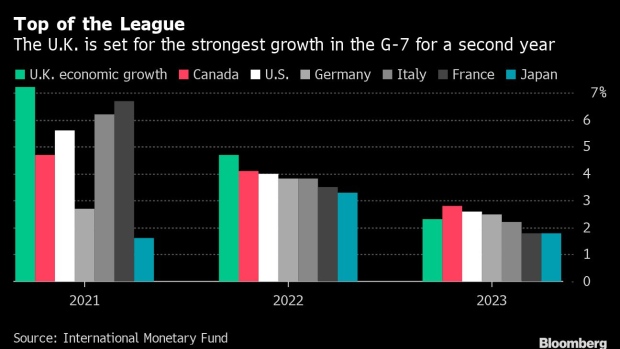 (Bloomberg) -- Britain will be the fastest growing major industrial economy for a second year in 2022, the International Monetary Fund said.

The Washington-based institution expects 4.7% growth in the U.K. this year after a 7.2% expansion in 2021, putting it at the top of the growth table in the Group of Seven nations for two consecutive years.

The projection is a welcome distraction for Prime Minister Boris Johnson’s government, which is mired in a scandal about lockdown rule-breaches. It burnishes the credentials of Chancellor of the Exchequer Rishi Sunak, one of the favorites to take over if Johnson is forced to resign.

The U.K. returned to pre-pandemic levels of output in November, according to official data, which was a few months earlier than expected.

Although the IMF downgraded U.K. growth this year from 5%, the reduction was smaller than most other major economies. That’s an endorsement for Sunak’s handling of the pandemic, marked by a massive furlough program supporting the wages of those who were unable to work during lockdown.

Transport Secretary Grant Shapps credited the U.K.’s vaccine program for allowing much of the economy to remain open during the omicron outbreak.

“We have ended up being the country coming out of omicron before anyone in northern hemisphere, having our economy grow faster as a result,” Shapps said in an interview on BBC Radio 4’s “Today” program before the IMF’s estimates were released.

The IMF’s new forecasts indicate quicker growth in the U.K. than in the U.S., which the IMF has downgraded sharply from 5.2% to 4% due to tighter monetary policy and persistent supply chain disruptions.

Britain’s expansion will almost match China, which the IMF also downgraded on “pandemic-induced disruptions related to the zero-tolerance Covid-19 policy.” It also blamed the fallout from the financial turmoil coming from property developers.

China will grow just 4.8% this year, far slower than pre-pandemic trends rate from 6% to 7%, the IMF said.

“In the U.K., disruptions related to omicron and supply constraints, particularly in labor and energy markets, mean that growth is revised down by 0.3 percentage points to 4.7%,” the report said.