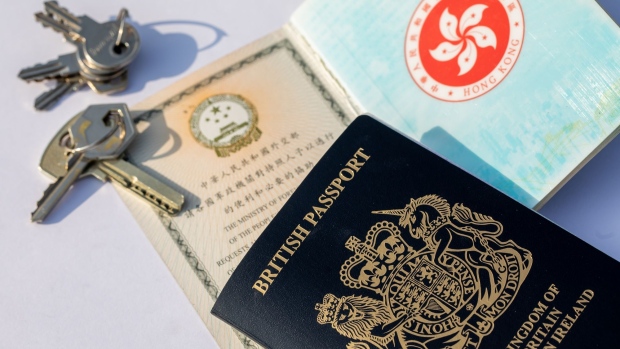 (Bloomberg) -- The U.K. said it will spend 43 million pounds ($59 million) to help the settlement and assimilation of Hong Kongers arriving under a new immigration route introduced after China imposed sweeping security powers over the former British colony last year.

The U.K. responded to China’s National Security Law by offering a path to British citizenship for eligible residents, and Prime Minister Boris Johnson’s government expects hundreds of thousands to take up the new British National (Overseas) visa. In the three months to March, 27,000 people had applied.

Beijing says its new law is designed to bring Hong Kong into line with mainland China and clamp down on sedition and terrorism.

The U.K. government has faced criticism that it has been too slow to set out help for people arriving from Hong Kong.

“This program will ensure British National (Overseas) status holders and their families have the very best start as soon as they arrive, and support to help them find a home, schools for their children, opportunity and prosperity,” Communities Secretary Robert Jenrick said in an emailed statement.