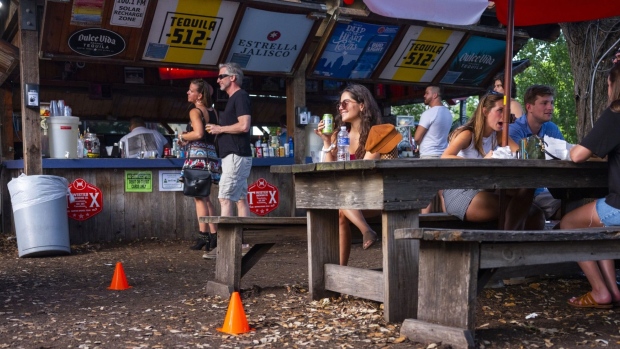 Cones to promote social distancing sit on the floor of a restaurant and bar in Austin, Texas, U.S., on Saturday, May 23, 2020. Texas bars, bowling alleys and other businesses were able to reopen for the start of Memorial Day weekend as part of Governor Greg Abbott's efforts to revive the state's shattered economy. Photographer: Alex Scott/Bloomberg , Photographer: Alex Scott/Bloomberg

(Bloomberg) -- U.S. cases had the biggest jump in three weeks, as new infections topped 30,000 for a second straight day, adding to concern about a resurgence. Data shows more than two dozen U.S. states had more cases than the previous day.

The Yankees and Mets are leaving the hot spot of Florida for New York to train, pending a decision to start the 2020 baseball season. Spain ended its state of emergency and will let Brits enter without quarantine restrictions.

The clinical trial on a malaria drug has been stopped by the National Institute of Allergy and Infectious Diseases over low enrollment. Social distancing rules in England could ease as soon as next week.

Colorado Governor Jared Polis on Saturday extended his state of emergency declaration after the three-day moving average of cases started to increase. “The data is now starting to show a reversal of some of our gains,” he said.

Polis said workers in stores and business that interact with the public have been wearing face coverings, and he extended that practice to state employees and contractors dealing with mass transit operations and other services.

As many as 30 LSU football players, a quarter of the team, were quarantined this week over virus-related concerns, Sports Illustrated reported, citing sources it didn’t identify. The players were isolated because they tested positive or were found to had contact with those who tested positive, the magazine said.

Some players are quarantined after frequenting nightclubs near the Baton Rouge campus in an area called Tigerland, the magazine said. On Friday, the Louisiana Department of Health said more than 100 Tigerland bar-goers tested positive and warned those who have frequented the establishments to quarantine for at least 14 days.

One of two test kits developed by the Centers for Disease Control and Prevention to detect the “first wave” of the coronavirus failed because some reagents were “likely contaminated,” a Department of Health and Human Services review concluded.

Development of kits began in early January, on a rush basis, and the reagents -- needed to determine final results -- may have been exposed in late January, according to the report. Lab processes may have been insufficient to prevent the contamination risk, although “it is likely that time pressure also contributed,” the report found.

Spain will let Britons enter without having to undergo a quarantine starting Sunday, under the same rules that apply for European Union citizens, Foreign Affairs Minister Arancha Gonzalez Laya said Saturday in an interview with the BBC.

Upon arrival, they will have their temperature checked and be asked to register a contact with authorities. Spain is relaxing rules out of respect for more than 400,000 Britons who have second homes in Spain, she said.

Of almost 84 million foreign-visitor arrivals to Spain last year, 18 million were from the U.K., according to the National Statistics Institute.

Tulsa County in Oklahoma reported a 6.6% increase in cases on Saturday, with a record 125, to bring its total to 2,206 ahead of the Donald Trump re-election campaign rally at an arena in the city. Daily cases have climbed by more than 100 for three straight days, and the county accounts for 22% of the Oklahoma state total.

Six members of the Trump re-election campaign’s advance team tested positive for Covid-19 ahead of Saturday’s rally in Tulsa, Oklahoma, a spokesman said. Quarantine steps were taken after results from hundreds of tests, according to a statement.

“No Covid-positive staffers or anyone in immediate contact will be at today’s rally or near attendees and elected officials,” said Tim Murtaugh, campaign communications director. “All rally attendees are given temperature checks before going through security, at which point they are given wristbands, face masks and hand sanitizer.”

Thousands of Donald Trump supporters poured into Tulsa for his first campaign rally in three months at the 19,000-seat BOK Center, which is expected to be packed.

New York City accounted for 55% of the new infectins reported across the state, but Governor Andrew Cuomo said the city is still on-track to move to the second phase of reopening on Monday.

Infection rates were flat or lower in six of the state’s 10 regions, he said on a phone conference with reporters. Long Island and the Hudson Valley reported a slight rise, “but nothing extraordinary,” he said. The North Country region also had a slight rise, he said.

The Yankees and the Mets will move their baseball training camps from Florida, where cases of the coronavirus are accelerating, to New York City, Governor Andrew Cuomo said. The teams will work out at their home fields, in the Bronx and Queens.

“We’ve determined it’s possible for the Yankees and the Mets to safely conduct spring training in the state this year and are thrilled to begin reopening America’s national pastime right here in New York, Cuomo said. “I can’t remember the last time we had spring training in New York,” he said on a phone conference call with reporters.

The Associated Press said all baseball teams closed their training facilities in Florida and Arizona -- where infections are rising at a record pace -- after the Philadelphia Phillies said five players tested positive and the Houston Astros reported one team member got infected.

U.K. Chancellor Rishi Sunak suggested that England’s social distancing rules may be relaxed, saying a decision is due next week. The 2-meter (6 feet, 6 inches) rule, in place since March, has been criticized for undermining efforts to reopen shops, bars and other parts of the economy.

“I’m very understanding of the calls for action on that, particularly for the hospitality industry,” Sunak said on the BBC “That’s something that will make an enormous difference, I think, to many businesses who are keen to see a change.”

Non-essential shops opened this week, and pubs, cafes and restaurants are slated to restart as early as July 4.

Italy registered 262 new cases compared with 251 on Friday, based on figures from the country’s civil protection agency. A total of 238,275 cases have been reported since the end of February.

Lombardy added 165 cases, or 63% of all new infections; the region around Milan said this week that most new cases refer to past infections that are detected by increased testing.

The country had 49 new deaths were reported, compared with 47 Friday, bringing the total to 34,610.

Spain’s cases rose to 245,938 as the government prepares to end the country’s state of emergency, according to Health Ministry data. In the past 24 hours, 134 infections were detected, the ministry said on its website. A total of 36 deaths were reported in the past seven days and the total now stands at 28,322.

The state of emergency, declared in March to stem the outbreak, is due to end Sunday. In a televised address, Prime Minister Pedro Sanchez praised Spaniards for their discipline, urged continued caution and said the country would prepare for a possible second wave by building up a strategic reserve of materials and medicines.

A National Institutes of Health unit stopped a clinical trial evaluating whether hydroxychloroquine and azithromycin can prevent hospitalization and death from coronavirus. The National Institute of Allergy and Infectious Diseases, headed by Dr. Anthony Fauci, said fewer than 20 people signed up for a trial that targeted 2,000 adults. No safety concerns were associated with the trial.

A 78-year-old female patient died Saturday, Hong Kong’s Hospital Authority said in a statement, the first virus-related fatality in the city since mid-March and bringing its toll to five. The city has 1,128 confirmed cases.

The patient belonged to a recent cluster of local infections whose origins remain unknown to authorities. She was admitted June 2, but was transferred to intensive care six days later as her condition deteriorated.

Saudi Arabia will resume all commercial activities and lift restrictions on movement even as coronavirus cases show no signs of easing. Saudi Arabia reported another 3,941 cases of the virus on Saturday.

The curfew will be lifted across the nation from 6 a.m. on Sunday but international travel and the Muslim pilgrimage known as Umrah will continue to be banned, state-run Saudi Press Agency reported Saturday.