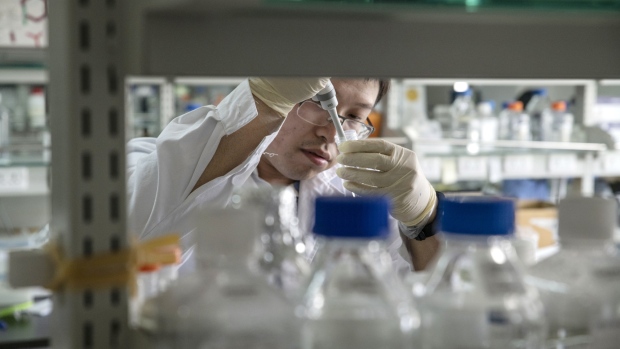 A researcher prepares a sample inside a laboratory at BeiGene Ltd.'s research and development center in Beijing, China, on Thursday, May 24, 2018. Biotech company BeiGene is worth about $9 billion on the Nasdaq, a multiple of about seven times its 2016 IPO, and its experimental cancer drugs are being closely watched globally. , Bloomberg

The Trump administration may concede to a Chinese proposal that would give less protection for U.S. pharmaceutical products than they receive at home, according to people familiar with the matter, a move that could draw opposition from the American drug industry.

Under the Chinese offer being discussed as part of wider trade talks, U.S. pharmaceutical companies would get eight years of regulatory data protection in China for the biologics they develop, said two people, who spoke on condition of anonymity because the discussions are private.

That compares with the 10 years of protection they get in the new Nafta, which Congress hasn’t yet approved, and the 12 years they receive in the U.S. The move raises the possibility that, in the middle of a fierce U.S. debate over drug prices, the Trump administration would give China a stronger mechanism to force down prices for some of the world’s most expensive drugs than the U.S. has.

Biologics refer to products made from living systems such as cells or tissues, as opposed to conventional drugs that have been chemically synthesized. Biologics are consistently among the highest-price drugs that pharmaceutical companies make.

U.S. Trade Representative Robert Lighthizer and his deputy Jeffrey Gerrish in recent weeks have informed pharma companies that China is dug in on its offer for eight years and the USTR officials have pushed U.S. industry to accept that outcome in a final deal, three people said. One person said USTR has threatened to remove the issue from the trade negotiations altogether if the industry pushes back.

But the take-it-or-leave-it approach employed by USTR is frustrating some in the industry who would like the Trump administration to fight for a longer data protection period, they said. Industry is also complaining that the administration kept them in the dark throughout the negotiations and is now asking companies to stand behind a final product that they don’t consider strong enough.

The development of biologics requires companies to generate and submit new clinical trial data to government regulators, which they review for approval. During the data protection period, a “biosimilar” competitor can’t rely on the innovator’s regulatory data to seek marketing approval for its product, PhRMA wrote in a blog post.

What’s agreed to in the China deal could have implications for other trade agreements. If the U.S. makes a concession to Beijing, it could weaken the Trump administration’s position as it tries to push for the approval of the U.S.-Mexico-Canada Agreement by Congress.

The USMCA provides at least 10 years of data protection for such drugs but congressional Democrats are pushing the Trump administration to shorten that period, arguing that the trade deal would lock in higher drug prices in all three countries. USTR has pushed back against that notion, saying the administration is committed to lowering drug prices for Americans while also realizing the need to protect intellectual property for pharmaceuticals.

The U.S.’s 12-year protection period was established in the Affordable Care Act, which became law in 2010.

The next round of U.S.-China trade talks is set to take place in Beijing next week. Lighthizer and Treasury Secretary Steven Mnuchin will travel to China for talks starting April 30 and Chinese Vice Premier Liu He will come to Washington the following week.