Prices paid by U.S. consumers rose in August by less than forecast, snapping a string of hefty gains and suggesting that some of the upward pressure on inflation is beginning to wane.

The consumer price index increased 0.3 per cent from July, the smallest advance in seven months, according to Labor Department data released Tuesday. Compared with a year ago, the CPI rose 5.3 per cent.

Excluding the volatile food and energy components, so-called core inflation climbed 0.1 per cent from the prior month, the smallest gain since February and a reflection of declines in the prices of used cars, airfares and auto insurance. 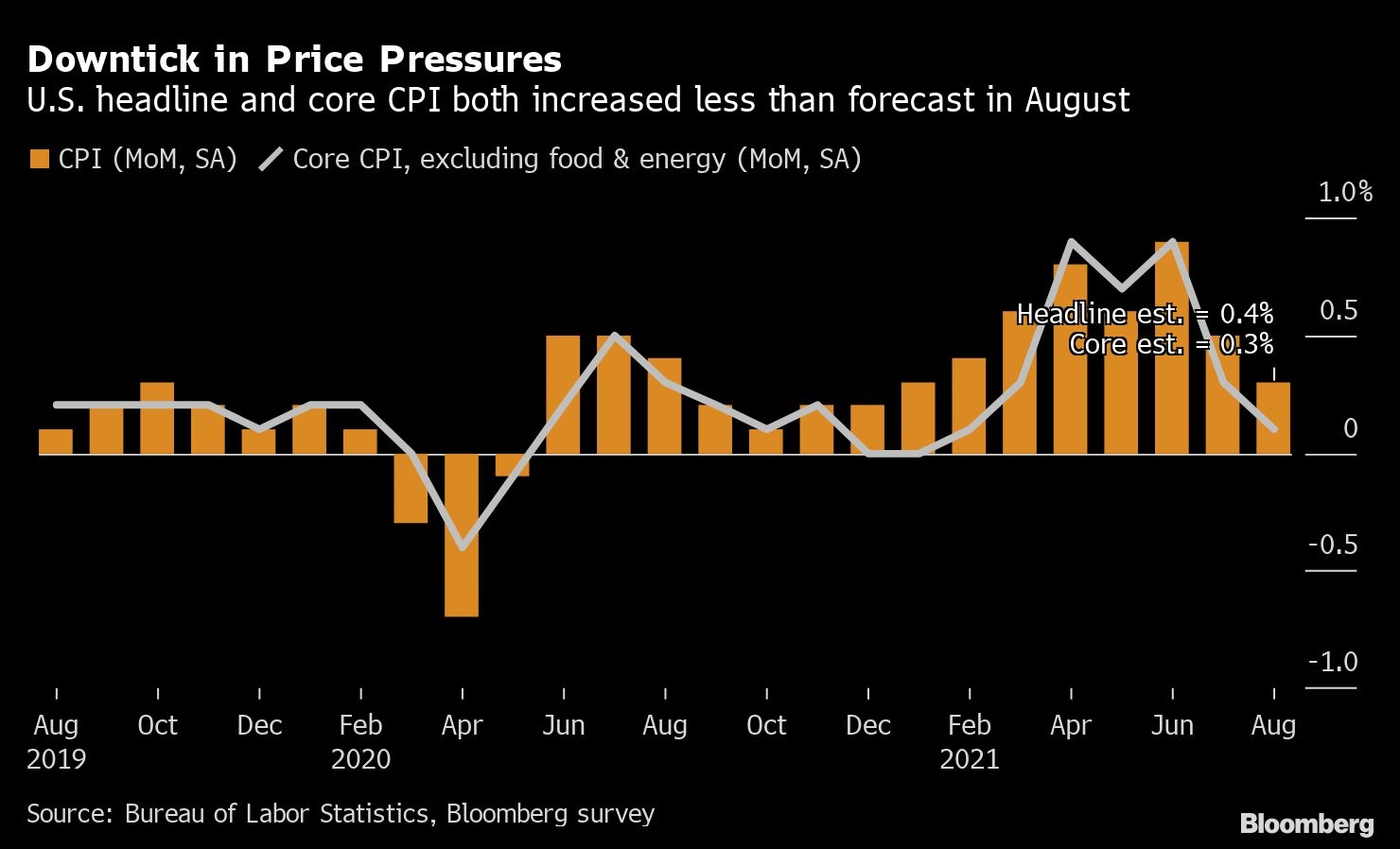 Economists in a Bloomberg survey called for a 0.4 per cent increase in the overall CPI from the prior month and a 5.3 per cent gain from a year earlier, based on the median estimates. Ten-year yields were down to 1.28 per cent and the dollar fell, while U.S. stocks were mostly lower.

Faced with mounting cost pressures as a result of materials shortages, transportation bottlenecks and hiring difficulties, businesses have been boosting prices for consumer goods and services.

While price spikes associated with the economy’s reopening are beginning to abate, tenuous supply chains could linger well into 2022 and keep inflation elevated. Economists at Citigroup Inc. said after the report that they “continue to see signals both in the details of the inflation report and in other data that broader inflationary pressure will prove more persistent than expected.”

A Federal Reserve Bank of New York survey showed Monday that consumers expect inflation at 4 per cent over the next three years, the highest in data back to mid-2013. The CPI report also showed the hot housing market is starting to filter through to rent prices, which rose by the most since March 2020.

The price data precede next week’s Federal Open Market Committee meeting, where Fed officials will debate how and when to begin tapering asset purchases. Fed Chair Jerome Powell said last month that the central bank could begin reducing its monthly bond purchases this year, but didn’t give a specific time line.

“The ‘is it transitory debate’ is far from over but at least, this more moderate gain in consumer prices will give the Fed some breathing room next week,” said Jennifer Lee, senior economist at BMO Capital Markets. “But not for long.”

The figures offer some validation of views among Fed officials and the Biden administration that high inflation will prove temporary. The report could also help blunt criticism from Republicans that President Joe Biden’s economic stimulus is spurring damaging inflation as he seeks to sell a US$3.5 trillion long-term tax-and-spending package that’s also running into opposition from moderate Democrats.

Parts shortages that have driven up input costs are restraining production. In the last week, Toyota Motor Corp. and 3M Co. both downgraded their outlooks for car output due to semiconductor shortages, while Nestle said it is introducing even bigger price hikes as commodity and transportation costs surge.

The CPI report showed prices for airfares dropped 9.1 per cent in August, used cars were down 1.5 per cent and vehicle insurance costs decreased 2.8 per cent.

The costs of hotel stays and car rentals also fell, a sign that softening demand as a result of the more contagious delta variant is leading to a deceleration in prices in high-contact sectors most impacted by the pandemic.

“We expect modest core CPI prints over the next few months, as used car prices -- the single biggest driver of the spring surge -- continue to fall but airline fares and hotel room rates eventually will rebound as the delta wave fades,” Ian Shepherdson, chief economist at Pantheon Macroeconomics, said in a note.

Rents and owners’ equivalent rent both climbed 0.3 per cent. Among other notable increases, prices of household furnishings jumped by a record 1.2 per cent from July. Costs of motor vehicle parts and equipment, as well as men’s suits, posted unprecedented advances.