COVID inflation is everywhere, but some have more of it than others. Among advanced economies, the U.S. is starting to look like the outlier.

That’s probably because it did more fiscal stimulus in the pandemic, economists say. The consensus is that high inflation won’t last long. But even if that’s right, the current elevated level has the potential to cause problems of its own -- for President Joe Biden’s most ambitious economic plans at home, and for other countries too.

August data due Tuesday is set to show annual growth in U.S. consumer prices stayed above 5 per cent in August for a third straight month, according to Bloomberg surveys. The median forecast was 5.3 per cent, down from 5.4 per cent the previous month. Most other developed countries have seen a spike too -- just not nearly as big. 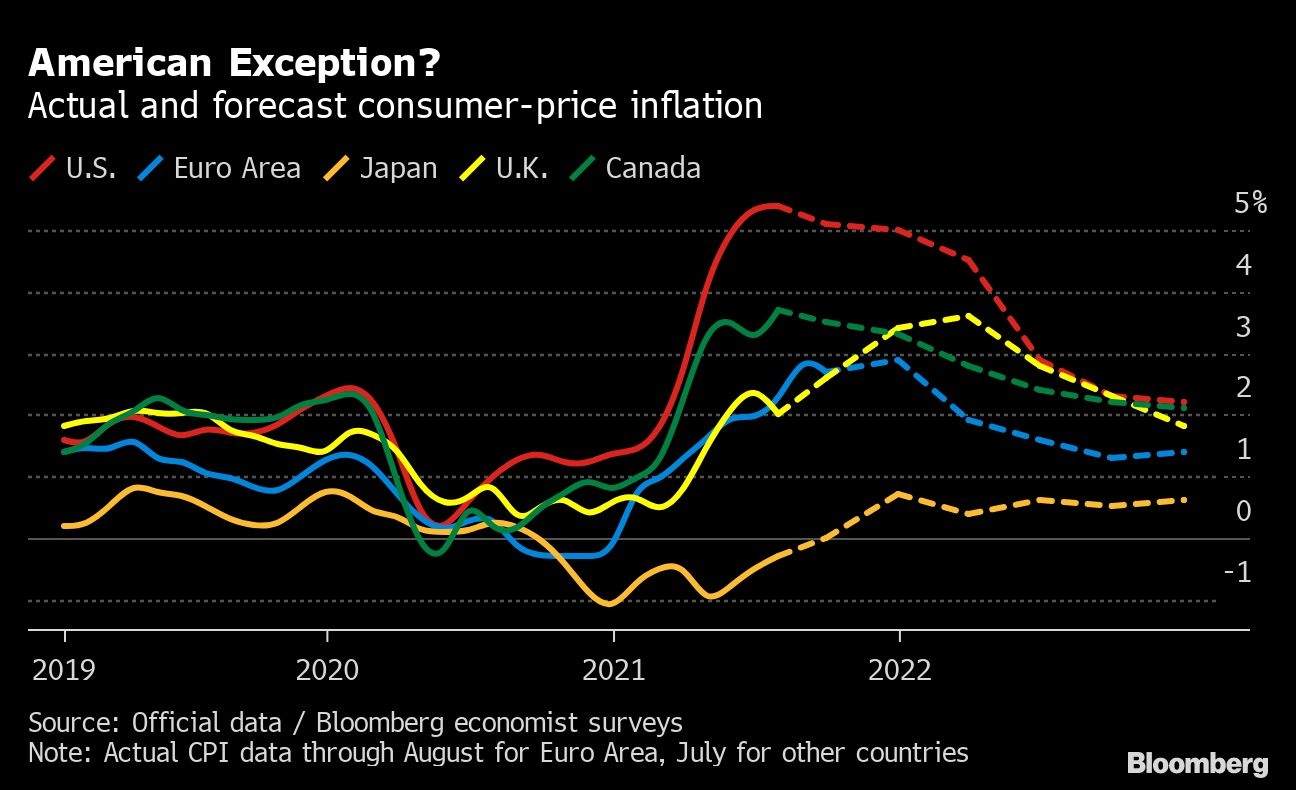 Much of the current wave of inflation has been driven by stretched global supply-chains. But research by the Institute of International Finance shows that while problems like longer delivery times are affecting all economies, they’re most acute in the U.S. –- and price markups by firms are bigger there too. That suggests stronger American demand is a key part of the picture.

“What’s striking is just what an outlier the U.S. is, when you actually put all the countries’ supply-chain statistics next to each other,” says Robin Brooks, the IIF’s chief economist. “It’s pretty clear to me that the fiscal side is what makes the U.S. stand out.” 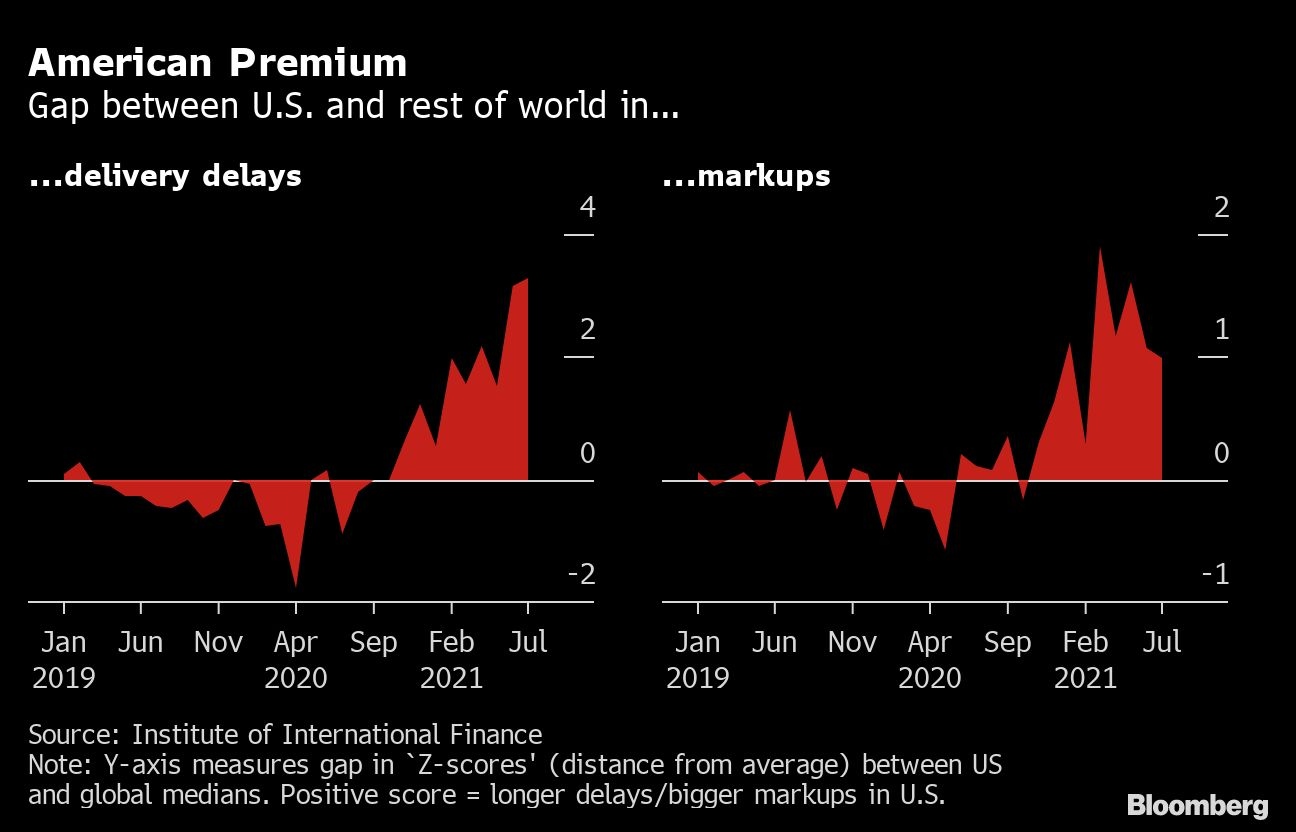 The gap may in part be a matter of timing. The U.S. rolled out vaccines and reopened for business faster than most, so the rush of post-lockdown demand happened there first, while it’s still gathering pace in other economies.

Rescue packages worth roughly one-quarter of GDP, bigger than in almost any other country, pulled the U.S. economy out of its pandemic hole earlier than many thought possible. But Furman says that’s not all they did: “I don’t know how you argue that you got dramatically faster real growth, but you didn’t get any faster price growth.” 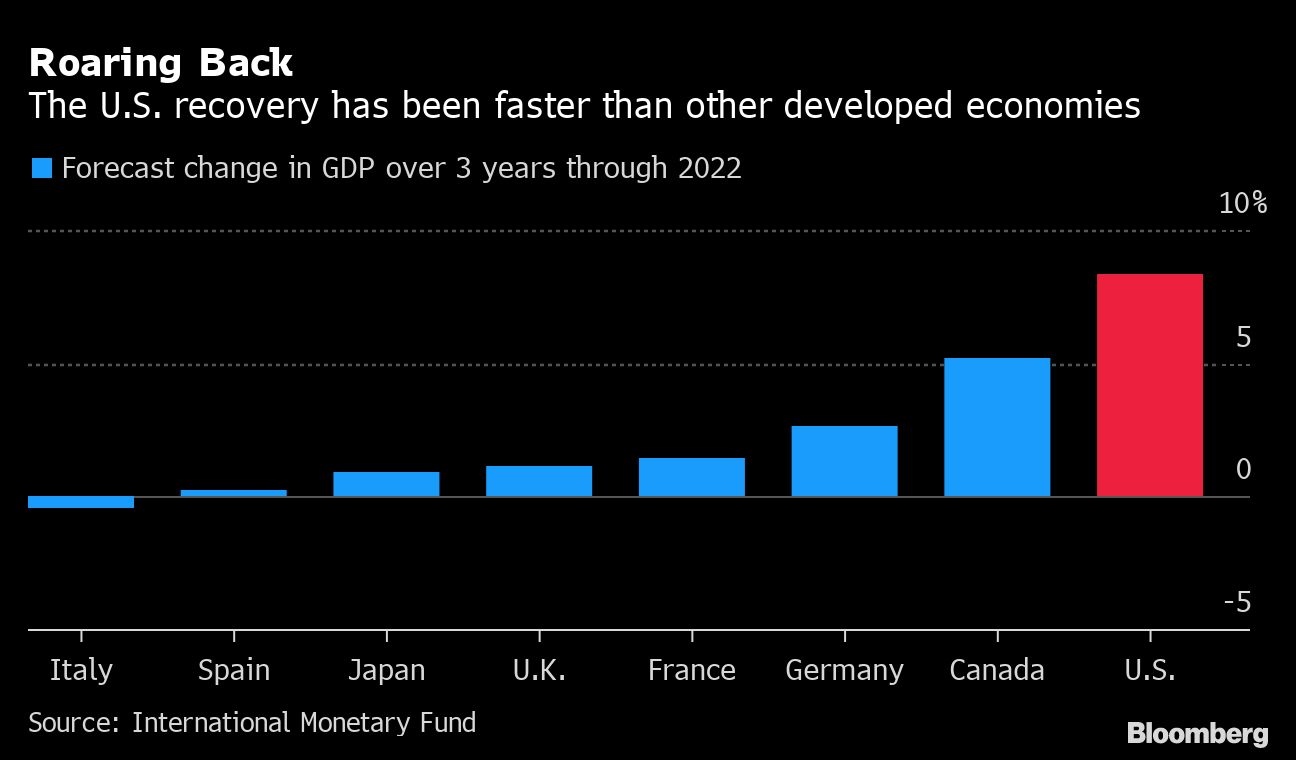 Brooks says America’s exceptional recovery may spell trouble for the rest of the world if stimulus-driven inflation leads to earlier monetary tightening. That could pull cash out of emerging markets, like in the 2013 “taper tantrum.”

“The U.S. is emerging from this crisis much faster than others,” he says. “It’s potentially globally destabilizing -- because nobody else was able to match that.”

None of this necessarily means the U.S. has made a grave economic error.

Lacking strong European-style social safety nets, policy makers were short of options other than discretionary handouts to households -- which they did more of than anyone else. 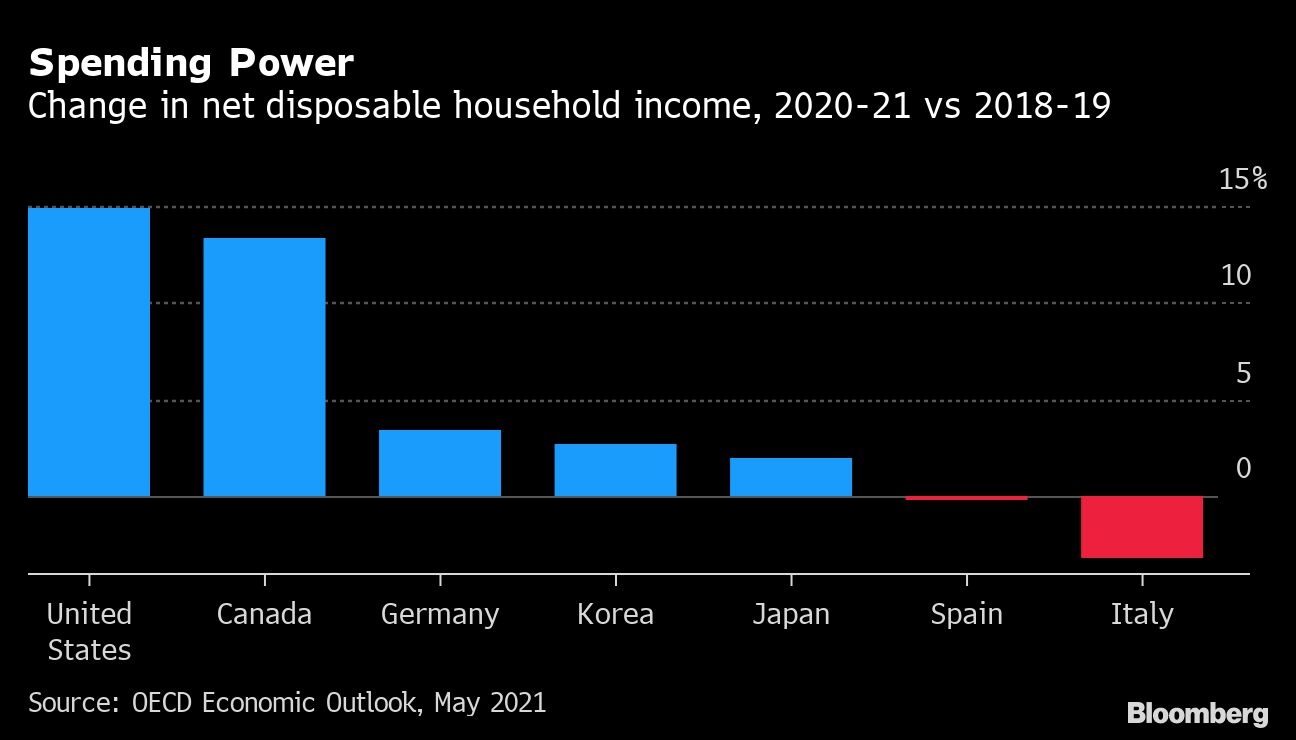 Their approach worked. And many analysts say that even if prices do climb a bit faster as a result, there’s no reason to fear a 1970s-style spiral -- because labor isn’t strong enough now to keep pushing wages higher like it did back then -- and monetary policy can easily rein inflation in.

Meantime, though, there’s a risk that even transitory inflation could derail Biden’s US$3.5 trillion program for cleaner energy and better childcare. He needs the votes of centrist Democrats in Congress like Senator Joe Manchin, who’s cited surging prices as a reason to scale it back.

Economists reckon Biden’s plan would be less inflationary than the US$1.9 trillion stimulus approved in March, because it invests in building the economy’s capacity. But it could get lumped in the same category.

“There’s always a bit of fighting the last war,” says Furman, who generally backs a bigger role for government spending. “If there’s high inflation in the U.S., that could help discredit fiscal policy.”

Higher-for-longer prices may also sap the newly-acquired resolve of the Fed and its global peers to prioritize growth and employment, according to Dario Perkins, chief European economist at TS Lombard.

“There is nothing inherently dangerous about inflation settling in, say, a 3-5 per cent range” instead of the 1-2 per cent that’s been normal for the past decade, he wrote last week. The bigger risk is that hitherto dovish central bankers “lose their nerve” and raise interest rates until it causes a recession, like they’ve done in the past.

Put differently: In the developed world, the fear of inflation may ultimately prove more damaging than inflation itself.