The Bank of Canada released guidance for the first time on how it plans to eventually reduce monetary stimulus, saying it will first raise interest rates before curbing its holdings of government bonds.

In a speech Thursday a day after a stand-pat decision, Governor Tiff Macklem provided details on what he called the central bank’s “monetary policy for the recovery.” Macklem reiterated the bank intends to bring its bond purchases to a roughly neutral pace where holdings and stimulus levels remain stable, and keep it there for a “period of time” before it begins withdrawing extraordinary support from the economy.

And when policy makers start paring back that stimulus, the first move will be to increase the central bank’s policy interest rate rather than reducing bond holdings, Macklem said.

“When we need to reduce the amount of monetary stimulus, you can expect us to begin by raising our policy interest rate,” Macklem said in remarks prepared for a virtual speech to the Quebec chamber of commerce.  “What this all means is it is reasonable to expect that when we reach the reinvestment phase, we will remain there for a period of time, at least until we raise the policy interest rate.”’

The Bank of Canada has been using two major tools to keep borrowing costs low: maintaining its main overnight policy rate near zero and buying up hundreds of billions of government bonds from investors to keep longer-term borrowing costs in check.

The central bank has already bought about $336 billion (US$266 billion) in Canadian government bonds under its asset purchase program, also known as quantitative easing. It started buying $5 billion a week initially but has since tapered those purchases three times to bring it to the current target of $2 billion a week.

Raising interest rates while shrinking bond holdings at the same time threatens to be too strong of a stimulus withdrawal.

“It matters because typically we have seen other central banks stop purchases and allow the balance sheet to begin rolling off during rate hikes,” Ian Pollick, head of fixed income, currency and commodity research at Canadian Imperial Bank of Commerce, said by email. “It is almost like you are doubling down on stimulus withdrawal.”

The roadmap laid out by Macklem is consistent with what economists and markets have been anticipating -- a final taper later this year to bring net purchases of bonds to about zero, followed by a first rate hike later in 2022. Swaps trading suggests that investors are pricing in a 100 per cent chance of a hike over the next 12 months. Three hikes over the next two years are fully priced in, which would leave Canada with the highest policy rate among Group of Seven economies.

Canada’s currency was little changed after the speech, after gaining about 0.5 per cent earlier in the day. 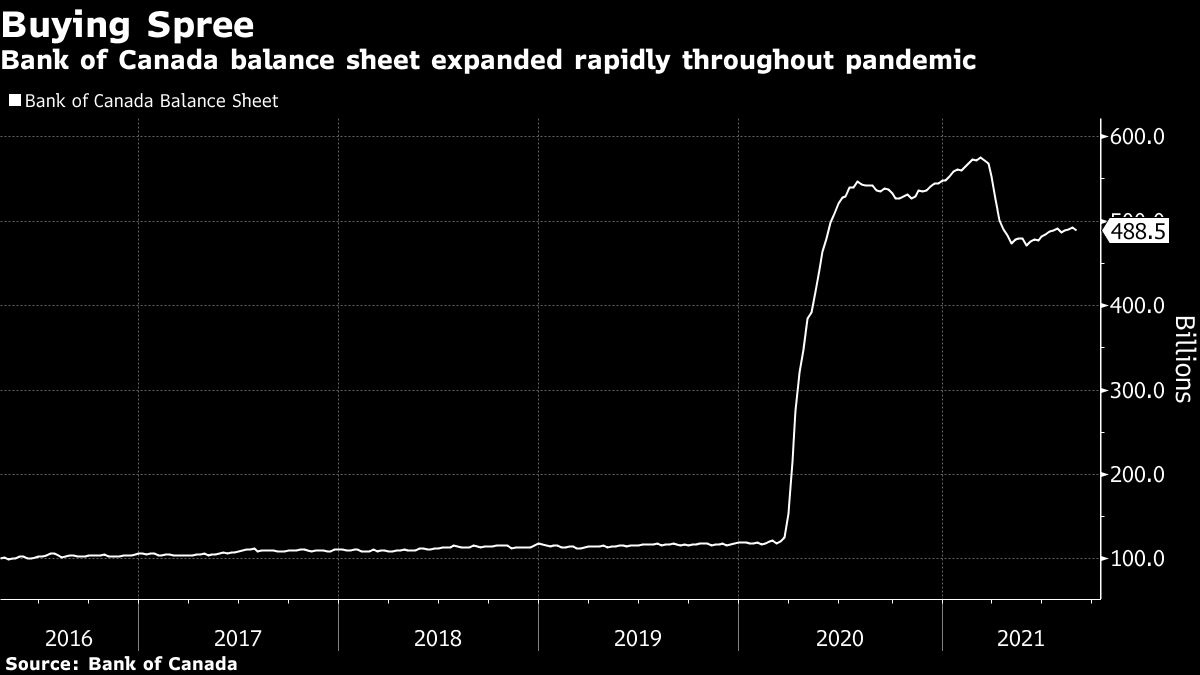 In his remarks, Macklem said the central bank believes it will need to continue buying about $1 billion a week in government bonds in order to keep its holdings at stable levels during the reinvestment phase, or about $4 billion to $5 billion a month. The reduction in purchases will take place in both the primary market and secondary markets, he said.

“Eventually, the reinvestment phase will end, and we will stop purchasing bonds to replace the ones that are maturing, so our holdings of Government of Canada bonds will decline,” Macklem said. “It is reasonable to expect that when we do eventually need to reduce monetary stimulus, our first move will be to raise the target for the overnight rate -- our policy interest rate.”

In its rate statement Wednesday, the bank maintained its guidance to keep its benchmark rate at 0.25 per cent until the economy is fully recovered and inflation has sustainably returned to 2 per cent, something it doesn’t see happening until the second half of next year.

On Thursday, Macklem highlighted that the recovery is progressing as vaccination rates allow businesses to reopen. However, he reiterated there remain a number of roadblocks, with supply chain issues weighing on exports and manufacturing, and the path of the virus and its variants still uncertain.

“This is real progress, even if the recovery remains choppy and we are still living with the virus and uncertainty about its course,” Macklem said.