U.S. consumer sentiment improved in April following another round of fiscal stimulus and as job growth accelerated. At the same time, inflation expectations surged to the highest in nine years.

The University of Michigan’s preliminary sentiment index rose to 86.5 from 84.9 in March, data released Friday showed. While the figure was softer than the 89 forecast in Bloomberg’s survey of economists, it remains at a pandemic high.

Consumers are more upbeat as the economic recovery strengthens. A surge in pent-up consumer demand is expected to propel the U.S. back to its pre-pandemic strength. At the same time, policy makers are watching closely to see how quickly prices increase as the economy takes off. 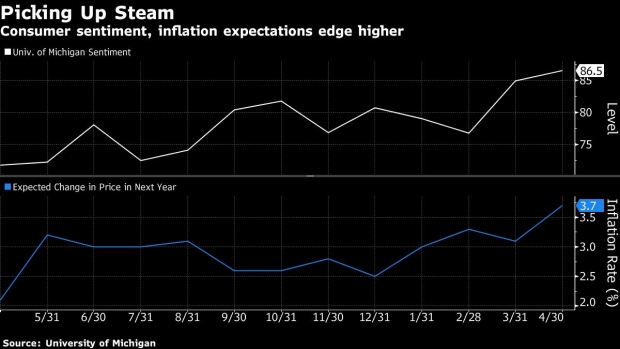 Consumers expect inflation to rise 3.7 per cent over the next year, the highest since March 2012. They expect prices over the next five years to increase 2.7 per cent, compared to 2.8 per cent last month.

The gauge of current conditions rose to 97.2, while a measure of expectations held at 79.7, according to the survey conducted March 24 to April 14.

“Many fewer consumers mentioned the appeal of low prices and many more justified buying based on improved job and income prospects,” Richard Curtin, director of the survey, said in the report.