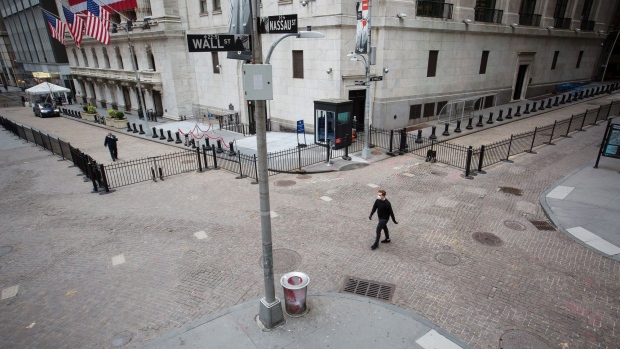 A pedestrian wearing a protective mask walks along Wall Street in front of the New York Stock Exchange (NYSE) in New York, U.S., on Monday, March 30, 2020. Roughly 37,500 people have tested positive for the coronavirus in New York City, officials said on Monday, up about 3,700 from a day earlier. Photographer: Michael Nagle/Bloomberg , Bloomberg

U.S. corporate profits rebounded significantly in the third quarter as businesses reopened more broadly and demand accelerated from a pandemic-induced slump in the first half of the year.

The government’s first estimate of earnings for the period showed a record US$495.3 billion annualized increase, or at a 27.1 per cent annual rate, the Commerce Department’s report on gross domestic product showed Wednesday. The improvement followed a 10.3 per cent decrease in the April-June period and a 12 per cent decline in the first quarter that was the biggest since the end of 2008.

The figures show both the magnitude and speed of the COVID-19 pandemic’s hit to the bottom lines of American businesses, and how companies’ fortunes reversed due to a surge in third-quarter demand. The improvement in profits help explain a stock market rally that saw the Dow Jones Industrial Average close above 30,000 on Tuesday. The economy expanded at an unrevised 33.1 per cent annual rate from July through September.

The report also showed for the first time that gross domestic income, which measures all income earned in the production of goods and services, increased an annualized 25.5 per cent in the third quarter after a record 32.6 per cent plunge in the prior three months.