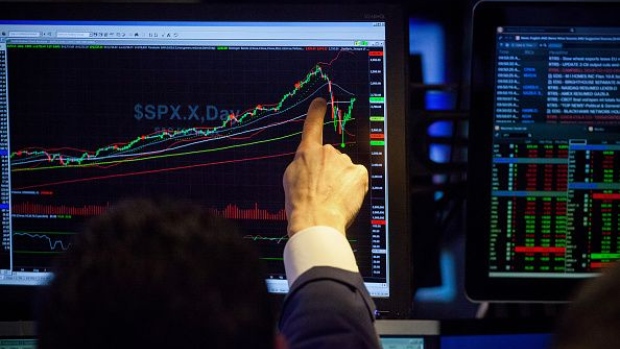 Take all the physical assets owned by all the companies in the S&P 500, all the cars and office buildings and factories and merchandise, then sell them all at cost in one giant sale, and they would generate a net sum that doesn’t even come out to 20 per cent of the index’s US$28 trillion value. Much of what’s left comes from things you can’t see or count: algorithms and brands and lists.

This is, in the broadest sense, a new phenomenon. Back in 1985, for instance, before Silicon Valley came to dominate the ranks of America’s biggest companies, tangible assets tended to be closer to half the market’s value.

The shift picked up after the financial crisis of 2008 and is taking off anew during the COVID-19 lockdown, with the value of intangible-heavy companies like Google and Facebook soaring while smokestack stocks languish. All of which is a source of deep concern for those who worry about things like employment and inequality.

The rise of intangibles helps explain why many American workers have recently had it so rough, with wages stagnating and benefits disappearing, and signals the slide could continue, according to the New York University professor whose writings have ignited a debate on the topic in academia, Baruch Lev.

In the abstract, it’s behind the backlash against giant tech firms that found its way into Congress. Put simply, these assets don’t require the hordes of workers to create and maintain them the way old economy ones did.

So for all the hand-wringing and fretting about how the pandemic run-up in tech stocks bespeaks a bubble that’s bound to burst, what if the bigger concern is that it doesn’t? 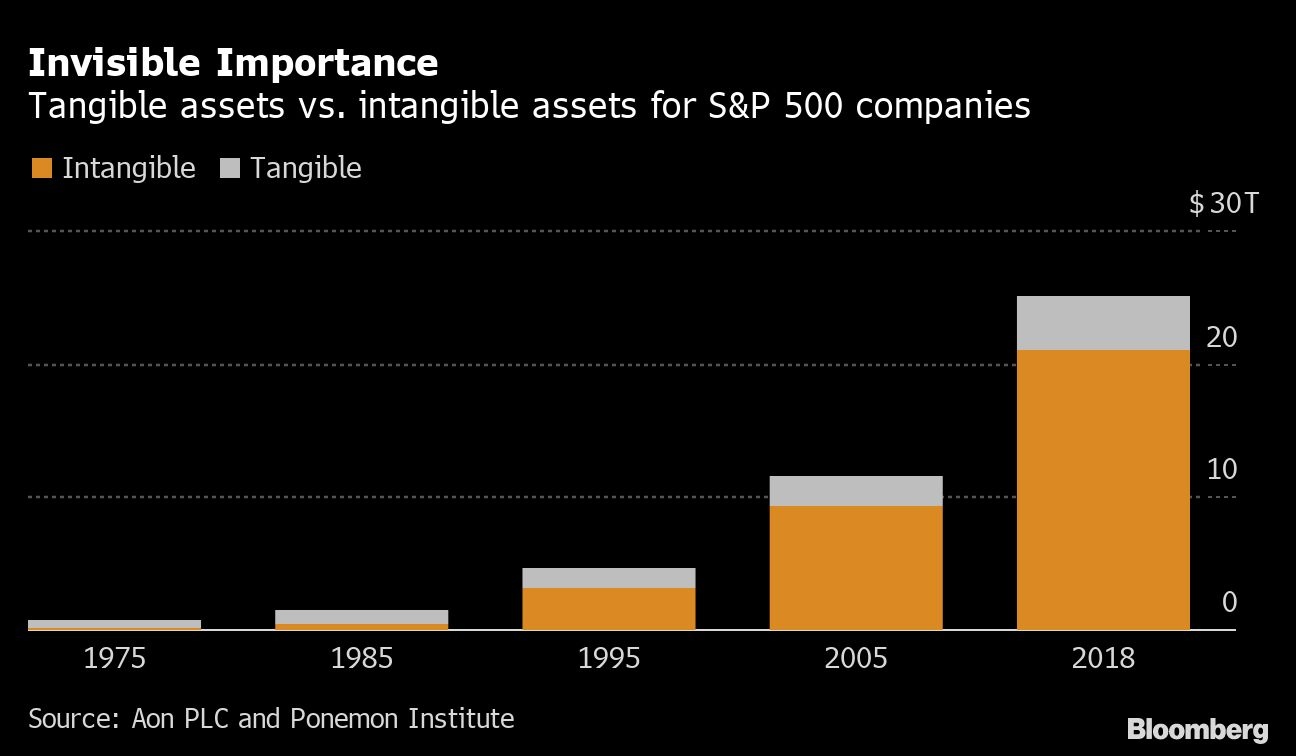 “When people think about this growing income inequality, much of it comes from the growing inequality in the corporate sector,” says Lev, the director of accounting research at NYU’s business school. “Those that are successful are enormously successful. And the others that still employ lots of people really cannot get out of this trap.”

At one level, this is all perfectly rational. Stock investors are just anticipating, and putting claims on, these companies’ ability to generate revenue streams for years to come. Industrial innovation has been framed as anti-human since its earliest days, often wrongly. Even the terms are squishy -- assigning market value to the tangible and intangible property is in many respects a judgment call.

Still, researchers including Lev are stepping up warnings, concerned about the influence of COVID-19 on the economy and equality.

By way of illustration, consider a company like Adobe Inc., whose programs altered the printing industry. So valuable are its formulas and algorithms that even with a market cap of $237 billion, the value of its hard, tangible assets comes out to virtually nothing. Adobe employs more than 22,000 people, by any measure a lot, but it’s part of a technological wave that by some yardsticks cut employment in printing by half. (An Adobe spokesperson declined to comment.)

If you work at a company riding this wave or better yet own one, you’re doing well. Adobe shares are up 50 per cent this year, part of a surge in tech shares that has added US$2 trillion to their combined market cap even as a recession raged. For everyone else, the news is less good. One loose way of thinking of the impact is that while intellectual property tends to create a small set of well-to-do workers, it often displaces a larger set of hourly ones.

“As we’ve all had to move into a digital world, it makes sense that a lot of the investments are in a digital world, which are intangible,” said Megan Greene, senior fellow at the Harvard Kennedy School. “It comes at the expense of the worker, though. This crisis has accelerated a lot of things, and that’s one of them.”

While even experts differ on what constitutes an intangible asset, and some view Lev’s definitions as loose, expansion in the value of things like Facebook Inc.’s advertising platform, Netflix Inc.’s customer algorithms and Amazon.com Inc.’s user networks is attracting attention now if for no other reason than it explains a mystery of the pandemic era: the stock market’s uncanny resilience.

Whenever someone points out that six or seven gigantic tech stocks dominate the S&P 500 like never before, they’re partly describing the rising dominance of invisible assets. Rallies in companies like Facebook and Alphabet Inc. are a key way the value of intellectual property has expanded.

As a result of those gains, S&P 500 members held more than $21 trillion in intangibles at the end of 2018, more than double 2005, according to a report by research center Ponemon Institute and Aon Plc, a professional services firm that provides risk and insurance consulting. That’s 84% of the S&P 500’s market value, the most ever. 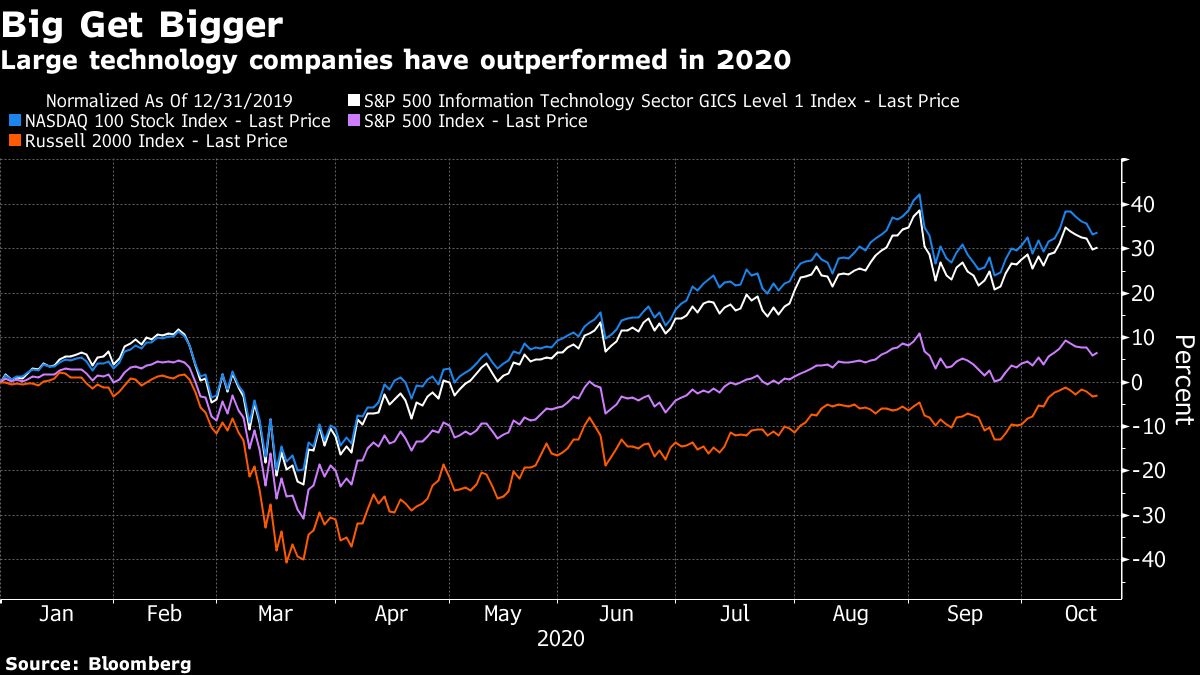 To be sure, not everyone buys those numbers, which treat anything that isn’t directly ascribable to a tangible asset in the S&P 500’s market value as intangible. “I got a Ph.D in finance, not accounting, but I would say I’m not sure if I agree,” said Linda Zhang, CEO and founder of Purview Investments and senior adviser to Social Finance Inc. “Market cap is an indication of willingness to pay for future earnings. Part of that difference could reflect how much both tangible and intangible assets can generate in earnings in the future. I don’t think the difference is just intangible.”

Even so, the market has never traded at such premiums to its hard assets. Data compiled by Bloomberg show the S&P 500 sits at more than 12 times its tangible book value, a record multiple.

While premiums on invisible assets have risen before, particularly in the dot-com bubble, this trend is bigger and more entrenched, given the enormous earnings that intellectual property now generate. Like most things in the economy, it’s being amplified by COVID-19, which divides have and have-nots according to who can work from home. The rich are getting richer in markets, too: as shares rebounded, valuations for the most expensive firms rose three times faster than the rest, Bloomberg Intelligence data show.

In the economy, that signal -- the market’s appetite for earnings based not on plants and machinery but ideas -- feeds itself. The share of business investment targeted at invisible assets is right now rising 1 1/2-times faster than it did during the financial crisis, itself a record period of hyper-investment in intangibles, estimates Jason Thomas, the head of global research at Carlyle Group.

“Such spending tends to be motivated by a desire to do more with less,” Thomas wrote in a report last month. “Past increases in the intangible share of corporate outlays have been associated with slower recoveries in employment.” 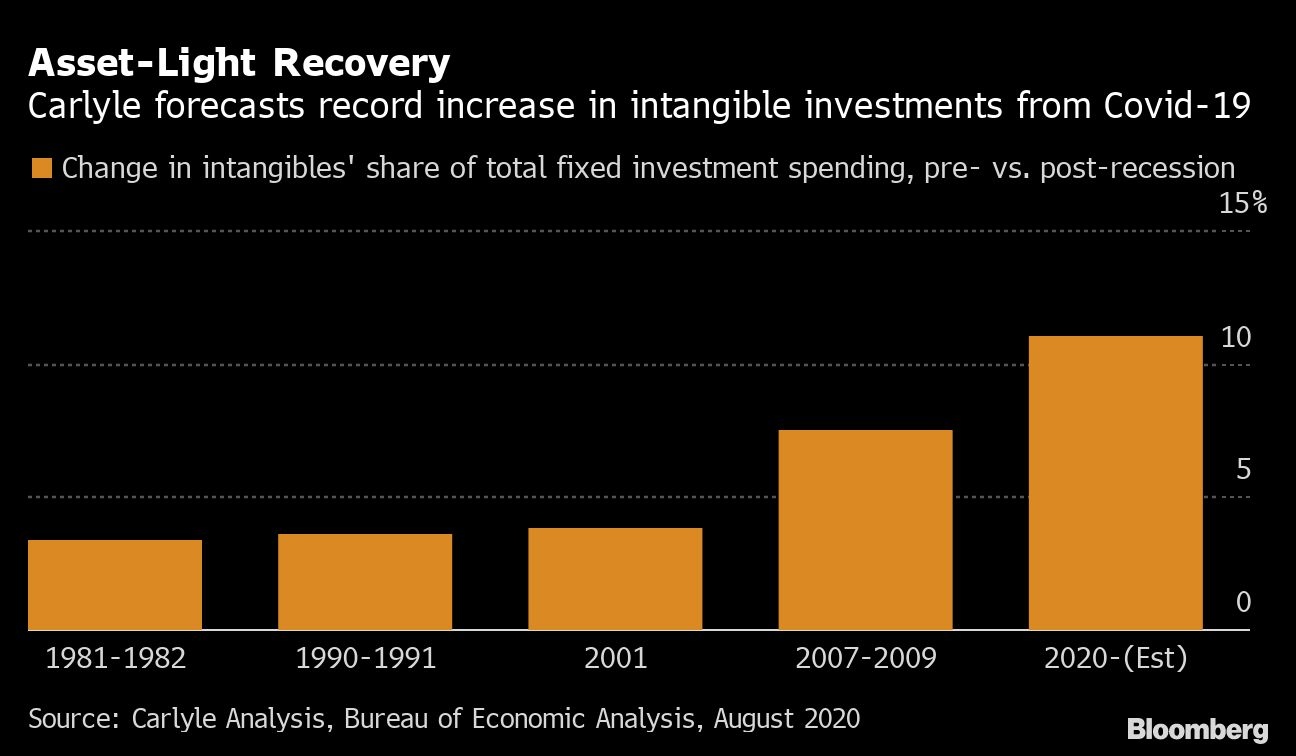 It’s a bleak projection for a labor market still reeling from the shutdowns, with close to eight per cent of people in the U.S. unemployed. Companies including Walt Disney Co. and Royal Dutch Shell Plc recently announced thousands of layoffs. Nearly 70,000 jobs have been cut across the banking industry this year.

According to Vincent Deluard, director of global macro strategy at brokerage StoneX Group Inc., this transformation is inherently unequal because it weights rewards to companies that by definition require fewer people. Back in the 19th century, capitalism required large physical investments, such as canals, dams and railroads, which in turn created jobs. That’s true to a much smaller extent now.

“Investments in intangible assets do not create many jobs. Think of the payment processing platforms versus the banks -- owning the network is always better than owning the physical branches. Think about social media versus newspaper -- owning the platform is much better than generating it,” Deluard said. “It is a huge secular transformation creating winners and losers everywhere.”

One of the main ways intangibles sap employment and other growth measures is their scalability, according to NYU’s Lev. A product whose value is derived entirely from a formula, like a drug or software, can be sold millions of times with minimal additional investment.

“But if you think about tangible assets, physical assets, they are not scalable,” Lev said. “You can use a seat in an airplane only once or twice a day. You cannot sell the same seat 5,000 times a day.”

There’s little doubt which model the stock market prefers this year. Investors have been falling over themselves to reward businesses that deemphasize humans. At a time people are kept at home and companies with fewer digital capabilities have struggled, firms that rely least on their employees compared with intangible assets have beaten labor-intensive ones by 37 percentage points in 2020, according to an analysis by Deluard.

The result has been already-giant companies in some cases doubling in size. The Nasdaq 100 is up 34% this year, compared with a 3% decline for the small-cap Russell 2000 gauge, and has almost doubled in less than two years. There’s a clear correlation between investment in intangible assets and market capitalization, according to the Aon report.

Dominance by idea-based companies boiled over in 2018 when for the first time the five biggest companies derived a majority of their value from intangibles, using Aon’s definitions: Apple, Microsoft Corp., Amazon.com, Alphabet and Facebook. They’ve done nothing but get bigger since, grabbing market share in the lockdown and pushing their weighting to a record 23% of the S&P 500 and close to half of the Nasdaq 100. 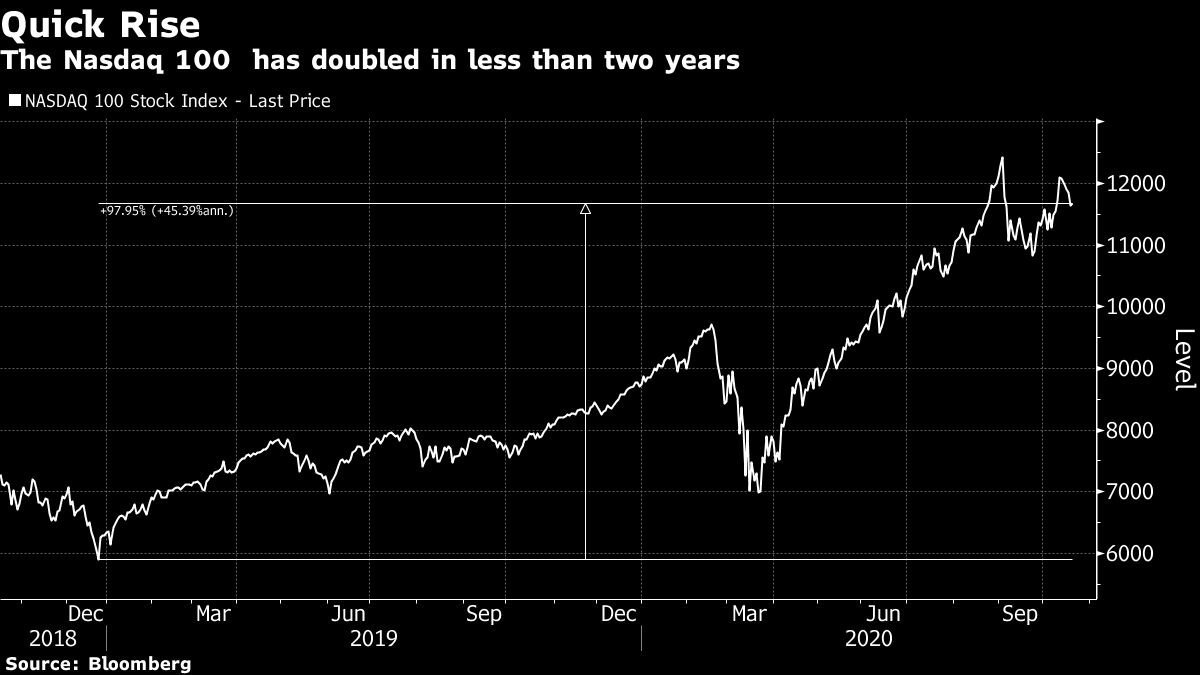 According to NYU’s Lev, estimates of intangible asset value are somewhat nebulous considering no one can possibly predict the future. For example, the value of Apple’s patents depend somewhat on China’s continued willingness to allow the iPhone maker to sell freely in its market. Still, he estimates roughly 75 per cent of S&P 500 value stems from intangible assets when taking into account fluctuations.

The value of Moderna Inc.’s intangible assets heavily rely on the biotech firm’s ability to develop and distribute a coronavirus vaccine. Consider the math: Moderna’s market-cap amounts to about $28 billion, yet the company’s tangible book value (what can be found on its balance sheet) is less than US$1.2 billion. That means US$26.9 billion -- or 96 per cent -- of Moderna’s market value is derived from intangibles. Shares of Moderna have soared 265 per cent this year.

Could it be a fad? To be sure, when some people hear “intangible asset growth” as a reason to justify stock surges and high valuations, they’re reminded of the dot-com bubble. Back in 1999, eyeballs and site visit numbers were inputs for premising investment, a strategy that ended in one of the greatest busts ever.

“You have to peg valuation to something and I always get nervous when the discussion changes from earnings, revenue, margins -- whatever you want to use as your metric,” said Paul Nolte, a portfolio manager at Kingsview Investment Management. “Now we’re changing that metric to something else because of the situation that we’re in, and all that’s doing is justifying the high price. To me that becomes more bubble-like.”

But Nolte acknowledges there’s a key difference between now and then -- that the darling megacap companies of today generate billions of dollars in profits. To some investors, there’s no obvious reason their preeminence should change.

“It’s amazing how being long intangibles, short human beings has been such a winning trade -- not just this year, but for quite a while,” said Jared Woodard, the head of the Research Investment Committee at Bank of America. “Right now we have an economy structured to reward these asset-light business models.”