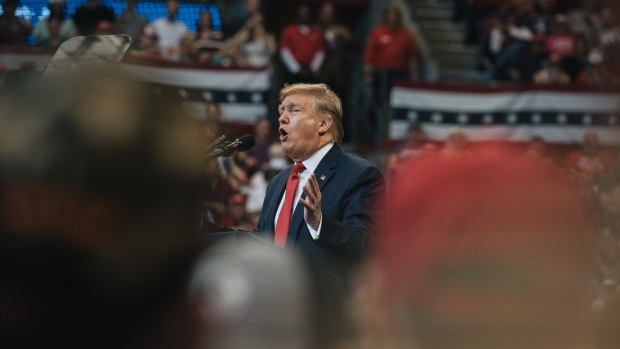 The House Intelligence Committee is preparing to release a scathing report alleging President Donald Trump engaged in a months-long effort to seek foreign interference in the 2020 election and obstruct a congressional investigation.

In a letter to Trump on Friday, Judiciary Chairman Jerrold Nadler previewed the conclusions from weeks of depositions and hearings, saying the forthcoming report will describe an “effort in which President Trump again sought foreign interference in our elections for his personal and political benefit at the expense of our national interest.”

It also will allege “an unprecedented campaign of obstruction in an effort to prevent the committees from obtaining evidence and testimony,” Nadler wrote.

The Judiciary Committee is set to open its first public hearings in the impeachment inquiry on Dec. 4. Nadler set a 6 p.m. Sunday deadline for the president to say whether he or his counsel will participate. Nadler is anticipated to receive the full Intelligence Committee report, including recommendations for potential articles of impeachment, before then.

The reference that Trump “again sought foreign interference” in an election indicates Democrats may look beyond the Ukraine controversy at the heart of the current debate to examine whether Trump encouraged Russia’s interference in the 2016 election.

Wednesday’s hearing is so far scheduled to include expert witnesses on the historical and constitutional basis of impeachment, and whether Trump’s alleged actions warrant pressing forward with possible articles of impeachment. The committee hasn’t yet announced who those witnesses will be.

Officials at the White House, as well as Trump lawyer Jay Sekulow, didn’t immediately respond to a request for comment on Nadler’s Friday letter. But the president has repeatedly dismissed the impeachment inquiry as a “witch hunt.”

Asked about Nadler’s invitation to the White House earlier this week to take part in the Dec. 4 hearing, Trump spokeswoman Stephanie Grisham said, “The White House is currently reviewing Chairman Nadler’s letter — but what is obvious to every American is that this letter comes at the end of an illegitimate sham partisan process. The President has done nothing wrong and the Democrats know it.”

In a separate letter on Friday, Nadler also gave the top Republican on the Judiciary panel, Representative Doug Collins, until Sunday to say whether he will seek Nadler’s approval to issue subpoenas. Nadler wrote that if he doesn’t agree with Collins’ plans, the GOP lawmaker can present his proposal to the committee for review on Dec. 9.