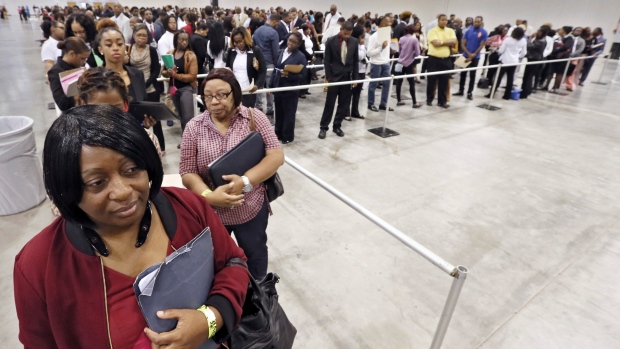 WASHINGTON - U.S. employers maintained a strong pace of hiring in October and boosted wages for workers, which could effectively seal the case for a December interest rate increase from the Federal Reserve.

Nonfarm payrolls increased by 161,000 jobs last month amid gains in construction, healthcare and professional and business services, the Labor Department said on Friday.

Adding to the report's strong tone, August and September data was revised to show 44,000 more jobs created than previously reported. Average hourly earnings increased 10 cents in October. As a result, the year-on-year gain in wages last month was the largest in nearly 7-1/2 years.

"All in all, the data fits perfectly with a Fed hike in December," said Alan Ruskin, global co-head of FX research at Deutsche Bank in New York.

The unemployment rate fell one-tenth of a percentage point to 4.9 per cent, in part as people dropped out of the labour force.

The closely watched employment report was published four days before the Nov. 8 presidential election. It came on the heels of data last week showing an acceleration in economic growth in the third quarter. But economists see little impact from the report on an increasingly bitter and divisive campaign.

"There is so much noise out there right now, everyone is screaming from the rooftops. I just don't know that any particular data point is going to have a great bearing on the election, in and of itself," said Sam Bullard, senior economist at Wells Fargo Securities in Charlotte, North Carolina.

WEIGH IN: What do you think matters most to U.S. voters? https://t.co/Sf2UieuOXN

Though the U.S. central bank is expected to increase borrowing costs next month, that decision will likely depend on the outcome of Tuesday's election. The tight race between Democratic candidate Hillary Clinton and her Republican rival Donald Trump has rattled financial markets.

The dollar raced to session highs against the yen and the euro after the report. U.S. Treasuries fell, while U.S. stock index futures trimmed losses.

Economists polled by Reuters had forecast payrolls increasing by 175,000 jobs last month and the unemployment rate falling to 4.9 per cent from 5.0 per cent.

A broad measure of unemployment that includes people who want to work but have given up searching and those working part-time because they cannot find full-time employment fell two-tenths of a percentage point to 9.5 per cent last month. That was the lowest level since April 2008.

The Fed on Wednesday left interest rates unchanged but said its monetary policy-setting committee "judges that the case for an increase in the federal funds rate has continued to strengthen." It lifted its benchmark overnight interest rate last December for the first time in nearly a decade.

"The election could still derail the Fed's plans, particularly if a very close result led to one or both candidates contesting it via the courts," said Paul Ashworth, chief economist at Capital Economics in Toronto.

The trend in employment growth has slowed as the labour market nears full employment and the economy's recovery from the 2007-09 recession shows signs of aging.

Employment growth so far this year has averaged 181,000 jobs per month, down from an average gain of 229,000 per month in 2015. Still, the monthly job gains are more than enough to absorb new entrants into the labour market.

Fed Chair Janet Yellen has said the economy needs to create just under 100,000 jobs a month to keep up with growth in the work-age population.

The prospects of an interest rate hike next month were also  bolstered by a solid rise in wages.

The Fed on Wednesday struck a fairly upbeat note on inflation, saying price pressures had "increased somewhat since earlier this year."

Despite the labour market nearing full employment, wage growth has been moderate. Economists blame this on a low labour force participation rate.

The participation rate, or the share of working-age Americans who are employed or at least looking for a job, fell 0.1 percentage point to 62.8 per cent last month, not too far from multi-decade lows, in part reflecting demographic changes.

The solid payrolls gain accompanied by the surge in wages could support consumer spending heading into the holiday season, and in turn keep the economy on a relatively higher growth path.

While the household survey showed a large increase in the number of people saying they could not get to work because of bad weather, the department said it was difficult to assess the impact of Hurricane Matthew on job growth last month.