This was a classic sell the rumor buy the news situation with the Fed: Belski

The Federal Reserve raised interest rates by 75 basis points -- the biggest increase since 1994 -- and Chair Jerome Powell signaled another big move next month, intensifying a fight to contain rampant inflation.

Slammed by critics for not anticipating the fastest price gains in four decades and then for being too slow to respond, Powell and colleagues on Wednesday intensified their effort to cool prices by lifting the target range for the federal funds rate to 1.5 per cent to 1.75 per cent.

He said another 75 basis-point hike, or a 50 basis-point move, was likely at the next meeting of policy makers. They forecast interest rates would rise even further this year, to 3.4 per cent by December and 3.8 per cent by the end of 2023. That was a big upgrade from the 1.9 per cent and 2.8 per cent that they penciled in for their March projections.

“Clearly, today’s 75 basis-point increase is an unusually large one and I do not expect moves of this size to be common,” he told a post-meeting press conference in Washington, remarks that were cheered in financial markets as he took the risk of a string of super-sized increases off the table.

Stocks climbed, halting a five-day rout that took 10 per cent off the S&P 500, while Treasury yields tumbled and the dollar pushed lower. Economists at Barlcays Plc said they expect the Fed will only raise rates by a half point next month.

“Powell’s press conference came across much less hawkish than the initial message” from the 75 basis-point increase and upgraded rate projections for 2023, Evercore ISI’s Krishna Guha and Peter Williams wrote in a note to clients. “Flexibly hawkish came across as a risk-friendly combination in asset markets.”

Still, the move on Wednesday was more hawkish than the 50-basis-point shift previously signaled by the chair, who explained the stepped-up pace by pointing to a run of data that showed inflation and expectations for it accelerating.

Late last week, a survey from the University of Michigan showed consumer inflation expectations pushing higher. Respondents anticipated inflation rising 5.4 per cent in the year ahead, the highest since 1981. Longer-term price expectations also picked up. 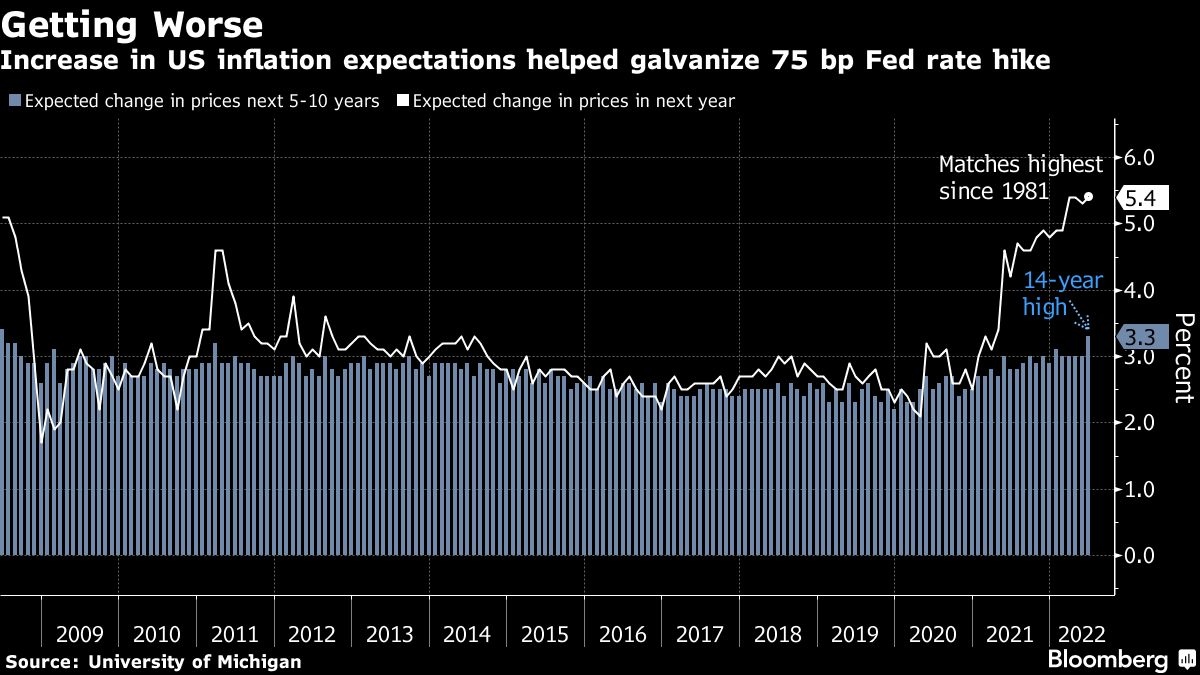 The preliminary June readings were “quite eye-catching, and we noticed that,” Powell said. “One of the factors in our deciding to move ahead with 75 basis points today was what we saw in inflation expectations,” in addition to the hotter-than-expected rise in the consumer price index for May released on Friday.

That said, even after the fresh inflation data, most economists and traders still saw a half-point increase as the most likely outcome -- in part because the Fed doesn’t like to spring surprises on markets or inject doubts over the strength of its guidance.

But most traders and economists switched their forecasts to a 75 basis-point hike after media reports on Monday, including by Bloomberg News, suggested policy makers would consider such a move.

“The most notable change in the policy statement is the omission of the phrase “the committee expects inflation to return to its 2 per cent objective.” That suggests the FOMC sees price pressures persisting, and has grown more alarmed about the potential unmooring of inflation expectations.”

The Federal Open Market Committee “anticipates that ongoing increases in the target range will be appropriate,” it said in a statement after a two-day meeting in Washington. “The committee is strongly committed to returning inflation to its 2 per cent objective.”

The Fed reiterated it will shrink its massive balance sheet by US$47.5 billion a month -- a move that took effect June 1 -- stepping up to a US$95 billion monthly pace in September.

The central bankers also revised their outlook for the economy from the soft-landing scenario of March to a bumpier touchdown, underscoring the tough task Powell faces as he tries to tame inflation running about three times the Fed’s 2 per cent target without causing a recession.

Having just won Senate confirmation to a second four-year term, Powell must also re-establish the Fed’s inflation-fighting credibility with investors and with Americans who are furious over the soaring cost of living.

“We’d like to see demand moderating. Demand is very hot still in the economy. We’d like to see the labor market getting better in balance between supply and demand,” he said, adding that officials won’t “declare victory” until they see compelling evidence that inflation is coming down.

But he dismissed the suggestion that the Fed was trying to induce a recession, saying he saw “no sign” of a broader slowdown while assuring Americans that higher rates could be borne.

“It does appear that the US economy is in a strong position, and well positioned to deal with higher interest rates,” he said.

The Fed aims for 2 per cent inflation measured by the Commerce Department’s personal consumption expenditures price index, which rose 6.3 per cent in the 12 months through April, near a 40-year high. Policy makers now forecast the gauge to advance 5.2 per cent this year, up from 4.3 per cent in the March projections, based on the median estimate of Fed governors and regional presidents.

They forecast gross domestic product growth to slow to 1.7 per cent this year compared with a 2.8 per cent expansion projection in March. Unemployment could rise to 4.1 per cent at the end of 2024 from 3.6 per cent.

Powell will testify before Congress over two days next week, where he can expect to be challenged over his central bank’s performance.

Having spent most of 2021 predicting the post-pandemic inflation surge would ease, policy makers have been repeatedly forced to rethink how high they expect to raise rates, sending financial markets into spasm as investors adjust to the risk of recession.

Recent data show household and business spending have largely held up, though a retail sales report earlier Wednesday suggested demand moderated in May. But persistent hot inflation poses a major political problem for President Joe Biden and Democrats who are defending their thin congressional majorities in November’s midterm elections.