Economists largely stuck to their forecasts that the Federal Reserve will raise interest rates to 5 per cent by March and hold them there for most of 2023, even after inflation slowed last month by more than forecast.

The Federal Open Market Committee will raise rates an additional percentage point over the next several meetings to confront inflation near a 40-year high, according to a Bloomberg survey of 65 economists that took place Nov. 4-11.

The economists kept their view of the Fed’s policy path despite a surge in markets following an unexpectedly large slowdown in price gains in October.

Officials got a bit more good news on Tuesday after Labor Department data showed U.S. producer price growth stepped down in October by more than expected in the latest sign that inflationary pressures are beginning to ease.  The producer price index for final demand advanced eight per cent from a year ago, the smallest annual gain in more than a year, and 0.2 per cent from month earlier.

Fed officials remain resolute to continue their fight against inflation and not prematurely halt rate hikes in order to ensure a return to the two per cent target, even as they acknowledge the economy could suffer pain and a possible recession.

Fed Vice Chair Lael Brainard said “we have additional work to do” during an event at Bloomberg’s Washington bureau Monday, several hours after Governor Chris Waller said “we’ve still got a ways to go” on rates and pledged to keep them high for a while to dampen price pressures.

The U.S. central bank has raised its benchmark rate from almost zero in March to a target range of 3.75 per cent to four per cent this month in a bid to slow the economy and bring inflation that surged following the COVID-19 disruptions of 2020 and 2021. The most aggressive tightening campaign since the 1980s has included rate hikes of three-quarters of a percentage point at each of the last four policy meetings, triple the usual move. 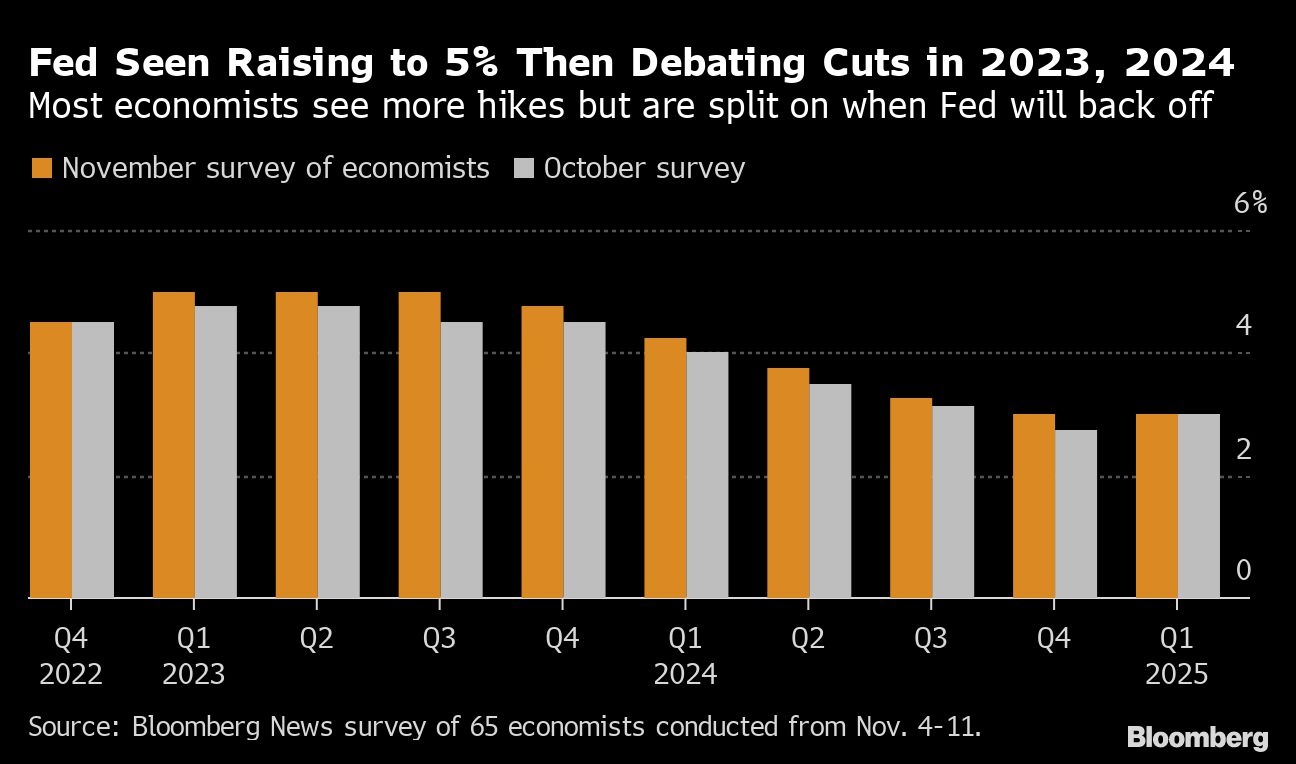 “The Federal Reserve is focused on defeating inflation, whatever the economic cost,” James Knightley, chief international economist at ING Groep NV, said in a survey response. “We look for Fed funds to peak at five per cent, but with nascent signs that inflation will fall sharply next year and the likelihood that recession will bite hard, the chances of a policy reversal  in 2023 are high.”

The economists see the Fed as somewhat more steadfast in keeping rates higher for longer than investors, despite recent positive inflation news.

“Markets surged as they read October’s soft CPI report as signaling that inflation is past the peak and an end to Fed rate hikes is in sight. Markets may have rejoiced prematurely. Recent developments have not changed our view that the Fed ultimately will have to hike rates to 5 per cent next year.”

Data released on Thursday showed consumer prices cooling by more than expected in October, with the consumer price index rising 7.7 per cent from a year earlier versus 8.2 per cent the month before.

News of the better-than-expected CPI report sent bond yields plummeting and saw investors harden bets that the Fed would scale back the size of its next rate increase in December to 50 basis points. Markets are now pricing in a peak near five per cent with rates falling to 4.5 per cent by the end of 2023.

The economists were split on when the central bank will back off of its aggressive rates. The median projection predicts rates will drop by a quarter in the fourth quarter of next year, though nearly half disagree and put rates at five per cent or higher.

Wall Street has a range of views, with economists at Goldman Sachs Group Inc. predicting the Fed will hold at five per cent at the end of 2023, while some competitors see cuts following economic weakness and lower inflation.

Reflecting the view that rates may be nearing a peak and that the path is largely priced in, the economists surveyed look for the 10-year Treasury yield, now 3.87 per cent, to peak at 4.03 per cent at the end of the current quarter and decline to 3.5 per cent by the fourth quarter next year.

There’s not a lot of doubt about the near-term outlook for rates. Economists now expect Fed officials to opt for a smaller, half-point hike at their Dec. 13-14 meeting following a signal from Chair Jerome Powell on Nov. 2 that such a downshift was in the offing, as well as the more positive inflation report.