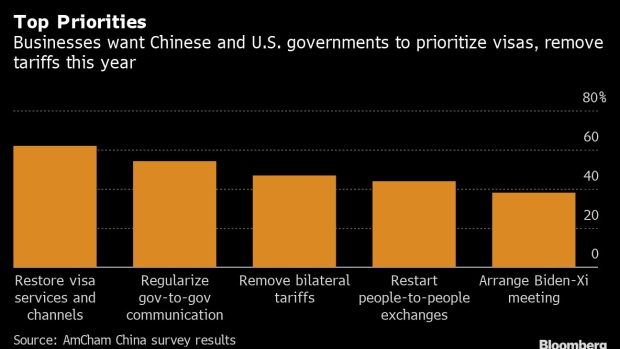 (Bloomberg) -- American firms in China are hoping for a meeting between Presidents Joe Biden and Xi Jinping this year, according to a new survey, as they look for relief from trade barriers raised during the Trump era.

More than 60% of American Chamber of Commerce in China members surveyed cited the need to restore regular visa services for business executives and their families, according to a survey released by the group Friday. Another 47% wanted the removal of tariffs, with more than three-quarters of companies complaining that measures levied during the trade war were impacting their operations.

Still, the results suggested companies realized that it was necessary to first improve ties that have remained tense despite Biden’s defeat of former President Donald Trump in November. Some 54% of respondents surveyed called for “regularized government-to-government communication” to rebuild relations, while 38% wanted a Biden-Xi summit this year.

While the chamber didn’t disclosed the names of the 125 companies that participated in the survey last month, its membership includes the Chinese branches of some of America’s best-known brands, such as Boeing Co., Coca Cola Co. and Walt Disney Co.

“The state of the overall U.S.-China relationship is as important as ever to the business community, with members prioritizing concrete results and actions as a way to restore trust between the two countries,” AmCham China Chairman Greg Gilligan said in a statement.

The prospects for a face-to-face meeting between the leaders of the world’s two largest economies look uncertain. Xi hasn’t traveled outside of China in some 600 days as Beijing maintains strict controls against the pandemic, damping hopes for a meeting with Biden on the sideline of the upcoming United Nations General Assembly in New York or the Group of 20 summit in Italy.

Xi hasn’t yet confirmed his presence at the G-20 meeting, according to a government official and senior European diplomat. The official cited Covid-19 protocols as the reason Xi may not attend in person.

High-level talks between top U.S. envoys, including Secretary of State Antony Blinken and climate envoy John Kerry have so far highlighted disagreements and yielded few results. Treasury Secretary Janet Yellen, who has expressed skepticism on the effectiveness of Trump-era tariffs, is said to be weighing a trip to China.

The survey suggested that companies were feeling more pain from tariffs. Only 22% respondents reported no impact from the measures, compared with 43% in the chamber’s Business Climate Survey last year.

Last month, more than 30 U.S. trade groups, including the U.S. Chamber of Commerce, the American Farm Bureau Federation and the Semiconductor Industry Association, called on the Biden administration to remove tariffs, which they said were harming the American economy.