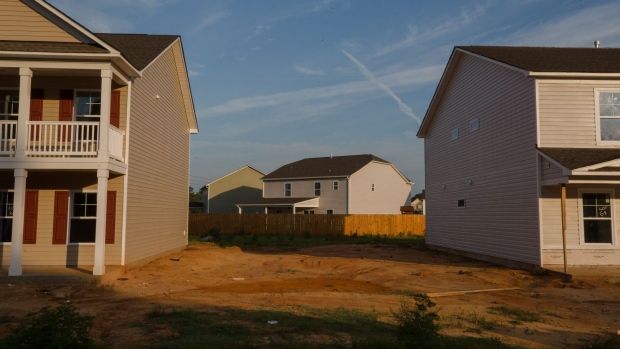 A finished home between two homes under construction in the Woodbridge subdivision in Sumter, South Carolina, U.S., on Tuesday, July 6, 2021. U.S. pending home sales unexpectedly rose in May by the most in nearly a year as low borrowing costs paired with increased listings bolstered demand. , Bloomberg

(Bloomberg) -- U.S. home sales in December had their biggest plunge since the early months of the Covid-19 lockdowns as listings sank to record lows.

Transactions fell 11% from a year earlier, the biggest annual decline since June 2020, according to a report Friday by Redfin Corp. Demand is still fierce, but what’s holding back deals is a lack of inventory: Active listings -- homes for sale at any time during the month -- fell 19% year-over-year to an all-time low. Meanwhile, prices jumped 15% to a median of $382,900.

Bidding wars for the few properties listed are driving up home prices. In turn, that’s squeezing out some first-time buyers, especially as mortgage rates start to rise from near record lows. At the same time, homeowners now sitting on a mountain of equity are using it to trade up.

“There are plenty of homebuyers on the hunt, but there is just nothing for sale,” said Redfin Chief Economist Daryl Fairweather. “In many markets, shopping for a home feels like going to the grocery store only to find the shelves bare.”

It’s a widespread slowdown with sales falling from a year earlier in 79 of 88 large metro areas tracked by the brokerage. The biggest declines were in Nassau County in New York and New Brunswick, New Jersey, both down 22%. Inventory fell in every area except Detroit, Redfin said.

Listings typically increase in January as the busy spring selling season approaches. But it won’t be enough.

“In January, I expect to see more buyers and sellers in the market,” Fairweather said. “But demand will increase more than supply, pushing prices higher.”