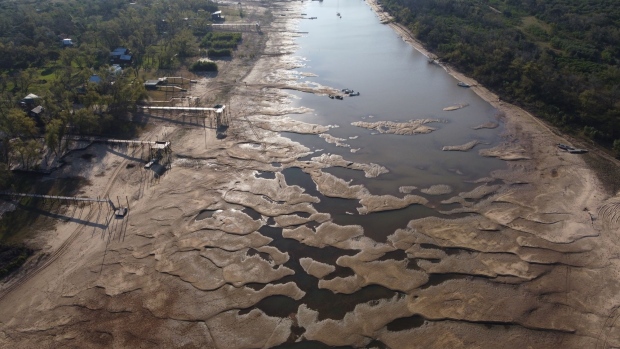 (Bloomberg) -- Climate change will exacerbate instability around the world and drive vulnerable people to flee hard-hit regions, the Biden administration is warning as it encourages other nations to commit to more aggressive greenhouse gas emissions cuts.

The administration is outlining the national security concerns of a warming world in stark terms across four reports being released Thursday.

The analyses project that no country will be spared from the security challenges and underscore the urgent need to move ambitiously to combat the phenomenon, a senior administration official told reporters.

The warning comes less than two weeks before the start of the United Nations summit on climate change in Glasgow, Scotland. The Biden administration is encouraging Australia, China, Russia, India and other nations to show up with new, more aggressive goals for slashing greenhouse gas emissions.

The administration also is trying to shore up U.S. action amid setbacks on Capitol Hill that have raised concerns that the U.S. will not be able to fulfill its own commitment to at least halve its planet-warming emissions by the end of the decade.

The White House is establishing a standing interagency working group to focus on climate change-driven migration, with plans to coordinate U.S. policy, strategy and spending on the issue.

The Pentagon has for years cautioned that rising seas, intense droughts and other consequences of climate change will contribute to strife around the world. But in one of the assessments being released Thursday, the government is providing its first official recognition that refugees will be forced to flee extreme weather and untenable living conditions as a result.

Some of them will seek to emigrate to the nearest stable democracies with strong economies -- many of which are U.S. allies that have already experienced waves of migration, according to the administration official, who spoke anonymously to discuss the reports before their release. And climate-related migration could cause greater instability among those countries.

The U.S. has a national interest in strengthening global protections for displaced people and will work to identify how the U.S. can provide new legal pathways to protection, the official said.

A separate national intelligence assessment predicts increased geopolitical tension as countries take steps to secure their own interests and even bicker over who should be doing more -- and how quickly -- in the transition away from fossil fuels as a source of energy.

And another analysis being released by the Pentagon on Thursday highlights that climate change will alter the way the military trains, fights and wins.