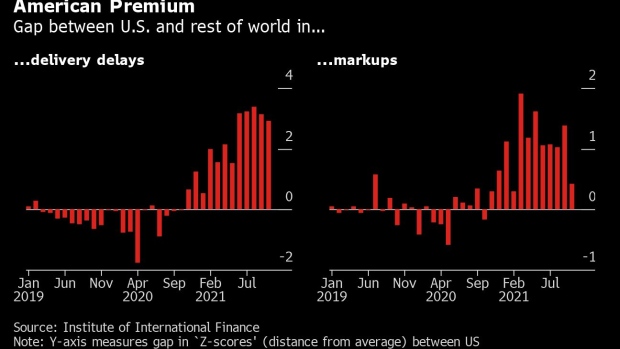 (Bloomberg) -- The U.S. is suffering longer delivery delays than other economies because of stronger demand from American consumers, a signal that high inflation rates are likely to persist, according to the latest research by the Institute of International Finance.

IIF analysts looked at data on delivery times from manufacturing surveys in all major economies. They found that while the global supply-chain crunch is causing tailbacks everywhere, the U.S. “continues to be an outlier” in the latest monthly data from October, with longer waits for supplies to arrive.

U.S. firms have also been marking up prices by more than most of their international peers -- suggesting they enjoy more pricing power because of the robust consumer demand -- although that gap narrowed in October. The IIF study is due to be published Thursday.

While the faster rebound in U.S. spending earlier in 2021 may have been driven by a more rapid rollout of vaccines, that’s no longer the case and bigger fiscal stimulus is a better explanation, they argued.