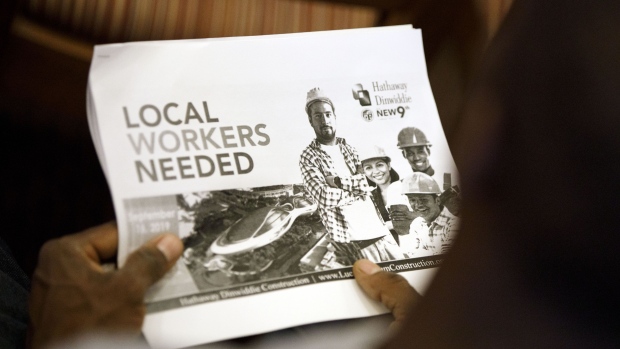 A job seeker holds an information packet during a fair for construction jobs at the Lucas Museum of Narrative Art in Los Angeles, California, U.S., on Monday, Sept. 16, 2019. The Department of Labor is scheduled to release jobless claims figures on September 19. Photographer: Patrick T. Fallon/Bloomberg , Bloomberg

U.S. claims for unemployment benefits unexpectedly fell to a one-month low, though the recent increases in coronavirus cases and business closures threaten to keep layoffs elevated through early 2021.

Initial jobless claims in regular state programs declined by 19,000 to 787,000 in the week ended Dec. 26, according to a Labor Department report Thursday. That was less than the 835,000 median estimate in a Bloomberg survey of economists. The figures are often volatile around holidays and last week included Christmas. Without adjustments, claims dropped by 31,736.

Continuing claims for state programs, which roughly correlates to the total number of people receiving state unemployment benefits, also decreased, to 5.22 million in the week ended Dec. 19. Economists projected an increase to 5.37 million.

Underscoring the pandemic’s damage to the job market as 2020 draws to a close, claims for benefits have averaged 1.45 million a week this year compared with about 220,000 in 2019.

The surprise decline in claims is a welcome sign, though the level remains elevated as economic fallout from the coronavirus continues to reverberate. While the stimulus package recently signed into law should cushion the blow of further shutdowns and closures, it may take some time for funds to reach consumers and without a widely available vaccine, is only a temporary measure.

“The lack of a clearer jump in new layoffs in response to broader activity restrictions in some areas is reassuring. Even so, the rate is still high and long-term joblessness is the more important problem, highlighting the importance of recent fiscal relief.”

The S&P 500 slipped in early trading, while the 10-year Treasury yield and the dollar were little changed.

Illinois, which reported a drop of more than 28,500 applications from the prior week, accounted for the lion’s share of the overall decline in unadjusted claims. Pennsylvania, Georgia and Texas also recorded sizable declines in filings. New York and California, among states with more pandemic-related restrictions, reported increases in jobless claims.

Still, a pickup in the number of jobless applications in the first half of December highlights economist expectations for a worsening labor market in winter as colder weather forces restaurants and retailers to close or cut hours, while an increase in COVID-19 cases prompts tougher measures in various states.

The December jobs report, released next week, is projected to be on the weaker side. Economists forecast a gain of about 70,000 jobs, the fewest since April when payrolls declined. Several analysts forecast headcounts shrank.

In addition to regular state claims, more than 308,000 initial applications were filed last week under the Pandemic Unemployment Assistance program, which provides funds for those not eligible for the state programs such as gig workers. In total, 8.46 million weeks of benefits were claimed for that program in the period ended Dec. 12.

There were also 4.77 million total weeks of claims in the Pandemic Emergency Unemployment Compensation, a separate program that provides additional weeks of benefits to Americans who have exhausted the regular state program.