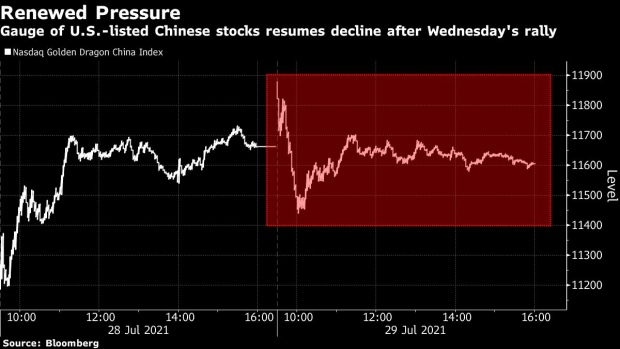 Didi, a centerpiece on Beijing’s recent clampdown, saw its shares jump as much as 20% after Dow Jones said the firm is considering going private without naming sources. Bloomberg News reported last week that Chinese regulators were considering a range of penalties for the company, including forcing it to delist.

Didi denied the news, posting on its official Weibo account that it would not be taking itself private.

“Taking Didi private at or near its IPO price, a possibility reported by Dow Jones, may be the best way for the company to resolve its regulatory issues and placate investors, in our view,” analysts Matthew Kanterman and Tiffany Tam said in a note.

Meanwhile, shares of tech-giants were mixed with JD.com Inc. and NIO Inc. both gaining more than 1.5% while Bilibili Inc. fell 3.4% for its fifth close lower in the last six sessions.

“If going private transactions are a viable option, I don’t expect them to be at terms advantageous to U.S. shareholders,” said Michael O’Rourke, chief market strategist at JonesTrading. “Since Didi already denied the story, it reinforces the reality the investors need to remain cautious.”