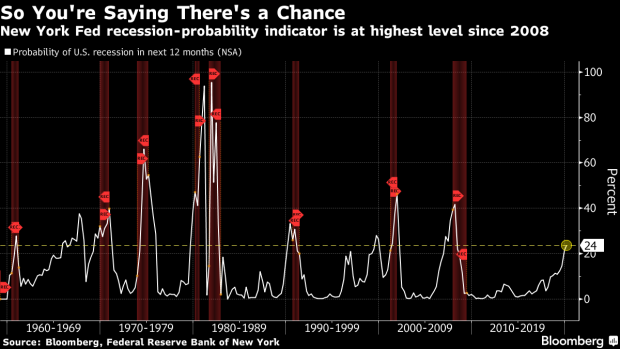 A pedestrian passes in front of a tube releasing a cloud of steam near the New York Stock Exchange (NYSE) in New York, U.S., on Monday, Jan. 7, 2019. U.S. stocks climbed following last week's rally with investors piling into small-capitalization stocks amid the resumption of trade talks with China. Photographer: Michael Nagle/Bloomberg , Bloomberg

(Bloomberg) -- Global economic growth is being hit more significantly than many anticipate and calls for an impending U.S. recession now look increasingly credible, which is bad news for risk assets, according to Europe’s top-ranked strategy team at Societe Generale SA.

The Fed’s dovish pivot should cast doubts on how the last leg of this cycle will unfold, with investors likely to see profit warnings, defaults and increased volatility over the next 12 months, they wrote in a report Thursday. That may be favorable for Treasuries but necessitates an underweight stance on equities, credit and the dollar, they concluded.

“The damage to economic momentum and earnings seems real,” said Alain Bokobza, head of global asset allocation at the bank in Paris. “This time, easy monetary policy may lack the strength to turn the tide and avoid a recession.”

Two leading economic indicators point to slower growth for the SocGen team -- the U.S. yield curve, oft-cited as a recession predictor when it becomes inverted, and a less widely used gauge of news sentiment. This model tracks articles on economic performance as a percentage of all media stories and typically moves at least three months ahead of a corresponding shift in global industrial production data, according to the report.

“Currently, our U.S. economic newsflow indicator is at levels that count among the 7 percent lowest readings since 1998,” they wrote. “This conveys a far more cautious message than the ISM indicator that would seem to be lagging on the downside.”

SocGen placed first in Europe’s Extel survey rankings for an 11th consecutive year for multi-asset research, according to its website.

Riskier assets -- including stocks and high-yield bonds -- have been on a tear since late December as a more neutral stance on U.S. monetary policy dampened recession fears and raised hopes the current economic upturn will become the longest in history.

Still, other indicators also show a growing risk that things could sour. The Federal Reserve Bank of New York’s recession probability gauge, which uses the 10-year/3-month Treasury yield curve to predict the chance of a contraction in the next 12 months, recently hit its highest since 2008 -- 24 percent.

“The next recession could come sooner than expected,” the SocGen strategists wrote. “As there are no signs of an end to the sharp drop over the past few months in our indicators, hopes for improvement in the growth outlook seem purely speculative for now.”

To contact the editors responsible for this story: Christopher Anstey at canstey@bloomberg.net, Joanna Ossinger, Cormac Mullen